New to the Collection: Fob Owned by Members of the Chillson Family 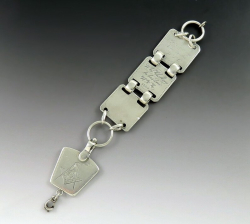 The Scottish Rite Masonic Museum & Library recently added an intriguing piece of silver jewelry to its collection--a watch fob owned by three members of the Chillson family. Dates and initials engraved on this fob help tell its story.

Throughout the mid-1800s, an increasing number of American men wore watches, often keeping their timepieces safe and accessible in a vest pocket. A watch chain, usually threaded through a buttonhole, served to secure the watch to a vest, in case it slipped out of the user’s hand when he was checking the time. Some watch-wearers selected tokens and ornaments, called fobs, to add sparkle and pizazz to their watch chains. This fob is made of three square plates joined by wide rings. Rings attach an ornament in the shape of a keystone to the bottom-most plate. The square plates, made from cut down silver dollars, bear engraving detailing its different owners over time.

The first owner recorded in engraving on the fob is “L. D. Chillson” who gave the fob “to his Brother W. S. C., 1867.” Lorenzo Dow Chillson (1830-1921) was the giver; the recipient of this gift was the eldest of Lorenzo’s fifteen siblings, Waters Sherman Chillson (1808-1887). Waters, in turn, gave the fob “to his Son W. F. C.,” William Francis Chillson (1851-1922), in 1884. The keystone-shaped ornament connected to the plates is engraved with Masonic symbols. One side shows a Masonic emblem, a square and compasses with the letter G. The other is decorated with a mnemonic associated with the Mark degree of Freemasonry. Within this circle of letters, an engraver outlined a personal symbol chosen by William.  The symbol on this fob is a ticket punch with the initials W. F. C. engraved on it. These are William Francis Chillson's initials and the ticket punch relates to his profession--census records show that William worked as train conductor in 1880. 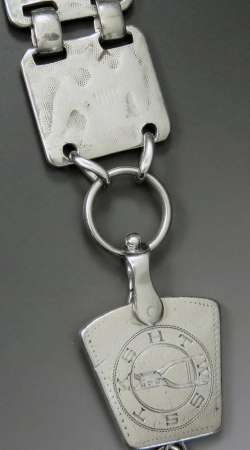 His uncle, Lorenzo Dow Chillson, worked in Nevada, Wyoming, Arizona, and California as a miner, surveyor, and entrepreneur. He is listed as a Master Mason at Washoe Lodge No. 157, in Washoe, Nevada, in 1863 and was a charter member of San Buenaventura Lodge No. 214 in Buenaventura, California in 1870. In the 1890s, he was involved in Freemasonry in Arizona. What prompted him to give this fob, or the silver dollars it was made from, to his eldest brother in 1864 is not known, nor is it known if a particular occasion led Waters Chillson to give the fob to his son almost twenty years later. Further research may offer insight into this object and its different owners in the Chillson family. In the meantime, it serves as a tangible reminder of the enduring connections between family members.

Scottish Rite Masonic Museum & Library staff get satisfaction from the rewards of research, the joy of discovering or rediscovering something that brings context to a document--and consequently to lives of others. In fact, in many cases, we gain a greater understanding of our own lives, as well as the lives of others, through our research. However, when we fail to establish the context or history of a document, that same process can be extremely frustrating.