The Lexington Alarm letter - on view and online in 2022! 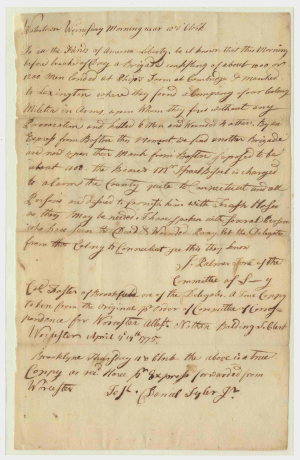 Each year during the celebration of Patriots’ Day, a Massachusetts state holiday, the Scottish Rite Masonic Museum & Library proudly displays an original copy of the Lexington Alarm letter—one of several letters created by the colonists to inform other colonies about the Battle of Lexington and the outbreak of war with England. It gives contemporary viewers a close-up look at the beginning of the American Revolution.

The original alarm letter was written by Joseph Palmer just hours after the Battle of Lexington, which took place around daybreak on April 19, 1775. Palmer, a member of the Committee of Safety in Watertown, Massachusetts, near Lexington, had his letter copied by recipients along the Committee of Safety's network. Using this system, the message was distributed far and wide. While the original alarm letter written by Palmer is thought to be lost, the Museum & Library has in its collection this version of his famous description of what happened, which was copied the day after the Battle of Lexington by Daniel Tyler, Jr., of Connecticut.

In addition to seeing the letter in person, you can also view our online exhibition, “'To all the Friends of American Liberty': The 1775 Lexington Alarm Letter,” which is now available on the Van Gorden-Williams Library & Archives Digital Collections website. This exhibition takes a close look at the Lexington Alarm letter that is in the Museum & Library's collection.