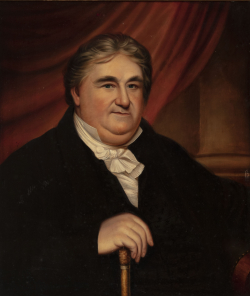 The Scottish Rite Masonic Museum & Library recently added this wonderful portrait to its collection. The subject of the portrait is New York City native Thomas Lownds (1762-1825), an intriguing character and a Masonic mover and shaker.

By profession Lownds (also spelled Lowndes) was a grocer and a baker. In middle age he left this trade to become superintendent of the alms house in New York City and of St. John’s Hall, a meeting place for many Masonic lodges in the city. Later he owned a boarding house and was, at the end of his life, in charge of running the city’s debtors’ prison. He also earned money serving as a Tyler for several Masonic groups. A history of Washington Lodge No. 21 notes that Lownds, who took his degrees at the lodge and served as its Master in 1808 and 1814, was “energetic, jovial, a good leader, and evidently popular among his companions” as well as “a restless, ambitious man, possessed of wonderful organizing ability.”

The same author described Lownds as “…inexhaustible in his enthusiasm for Masonry….” Lownds’ Masonic record supports this account. Lownds played key roles in several Masonic groups established in New York City in the early 1800s. He held the offices of Deputy High Priest and Grand Visitor of the Grand Chapter of New York in the 1810s. A charter member of the Aurora Grata Lodge of Perfection in 1808, Lownds later worked the Scottish Rite degrees with Joseph Cerneau, whose Rite was in competition with the Scottish Rite’s Northern Masonic Jurisdiction for many years. Additionally, Lownds held leadership roles in the at Columbian Commandery No. 1 and at the Knights Templar Grand Encampment in the 1810s. Lownds helped establish Cryptic Masonry in the United States, serving as Grand Master of the Grand Council when it was organized in 1823. From 1802 through the early 1820s, Lownds participated in almost all the forms of Freemasonry that were active in New York. When he died at the age of 63, the newspapers noted simply that Lownds was, “…an old and respectable inhabitant of this city.”

This undated portrait depicts Lownds as a vibrant man in middle age. In the image Lownds sits on a dark upholstered chair, with red drapery behind him. The understated background and his black clothing provide a contrast to Lownds’ expressive face, crisp neckwear, and the light-colored cane he holds in his right hand. This portrait is not signed, but its unknown artist left a compelling visual record of a strong personality who helped establish and sustain several Masonic organizations in their formative years.