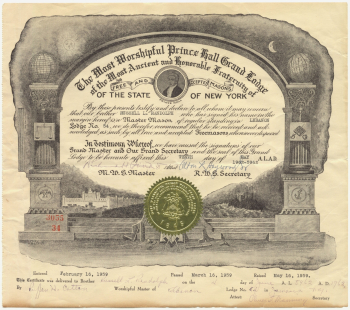 This collection brings together a number of documents related to historically Black fraternal organizations, including many related to Prince Hall Freemasonry.

A leading citizen in Boston’s eighteenth-century Black community, Prince Hall (1738-1807) was an abolitionist who petitioned the Massachusetts’ legislature to end slavery, and a Methodist who campaigned for schools to educate the African-American children of Boston. Hall was a leather dresser by trade who, in 1777, supplied drum heads to the Boston Regiment of Artillery. Drawn to Freemasonry’s values and opportunities, Hall, a former slave, tried to join Boston’s Masonic lodges in the early 1770s, but was denied membership.

African American men’s participation in Freemasonry is generally traced back to the March 6, 1775 initiation of Prince Hall and fourteen other Black men in Lodge No. 441, a British military lodge attached to the 38th Regiment of Foot. A year later, as the Siege of Boston was ending, the military lodge that had initiated Hall was evacuating Boston, but before they left, the lodge granted Prince Hall and his brethren authority to meet as a lodge, bury their dead, and march in processions for St. John’s Day. However, they were not given authority to confer degrees or perform any other “work.” With this authority granted to them, Prince Hall and his brethren organized as African Lodge No. 1 on July 3, 1775, with Hall as Master.

In order to become a fully functioning lodge that could confer degrees, African Lodge No. 1 needed to be chartered. Unable to obtain a charter from a Grand Lodge in the United States, they appealed to the Grand Lodge of England and were granted a charter on September 29, 1784 as African Lodge No. 459. Hall then founded lodges in Philadelphia and Providence. These three lodges eventually joined to form African Grand Lodge. It wasn’t until 1847, forty years after Prince Hall's death, that members of African Grand Lodge changed their name to Prince Hall Grand Lodge, in honor of their founder. Nearly 250 years after Prince Hall was initiated, Prince Hall Freemasonry continues to thrive today.

Be sure to check out previous blog posts which highlight documents from this collection.