In the spotlight this month at the Scottish Rite Masonic Museum & Library are two souvenirs from a 1950 Boston gathering that commemorated a 175th anniversary in Prince Hall Freemasonry. The mementos shown here—a colorful felt pennant and a miniature brass trowel, both currently on view in our exhibition, The Masonic Hall of Fame: Extraordinary Freemasons in American History—are but small reminders of an important development in American Masonic history.

In 1775, Prince Hall, a leader in Boston’s African American community, sought to join one of the city’s Masonic lodges but was denied membership on account of his race. Seeking an alternative path to becoming Freemasons, Hall and 14 other African American men joined a Masonic lodge, Lodge No. 441, attached to a British regiment stationed in Boston. Hall and his brethren petitioned the Grand Lodge of England for a charter for a new lodge of their own; in 1784, the Grand Lodge granted the requested charter for African Lodge No. 459 in Boston. Using this charter, Prince Hall later established lodges in Philadelphia and Providence, building the foundation for African American Freemasonry in the United States. 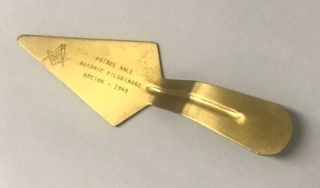 Nearly two centuries later, on August 13, 1950, African American Masonic groups from across the U.S. came together in Boston for a week of festivities to celebrate the anniversary of Prince Hall and his brethren’s initiation. According to a notice in the Boston Globe, the program was slated to include a parade of a stunning “15,000 Master Masons representing 41 Grand Lodges, 95,000 Master Masons, Grand Chapters of O.E.S. [Order of the Eastern Star], Holy Royal Arch Masons, Knights Templars, Shriners, Daughters of Isis and Consistories.” Participants made a pilgrimage to the grave of Prince Hall at Copp’s Hill Burying Ground and attended memorial services at Tremont Temple. Also among the convention’s highlights was the presentation of $15,000 to the American Cancer Society and $20,000 to Howard University-affiliated Freedman Hospital from the Shrine Tuberculosis and Cancer Research Foundations.

Today, Prince Hall Masons continue to support their communities at thousands of lodges across the nation and world. We invite you to learn more about the history of American Freemasonry at our online exhibitions and collections pages, as well as the museum’s Flickr page.