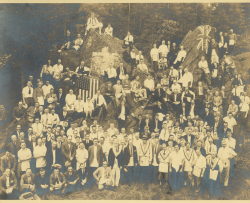 This holiday season as we think about ideas of unity and goodwill toward all, we highlight this 1934 photograph of members from Golden Rule Lodge No. 5 on Owl’s Head Mountain in Vermont. Since 1857, members of the lodge, located in Stanstead, Quebec, Canada, have hosted this annual gathering. They meet in June at the summit of Owl’s Head Mountain, 2,425 feet above Lake Memphremagog. The lodge, originally founded in 1803 in Derby Line, Vermont, and named Lively Stone Lodge No. 22, included members from both Canada and the United States.

In addition to the annual gathering—open to Masons from both countries—Freemasons from three American and Canadian villages in the area—Derby Line, Vermont and Rock Island, and Stanstead, Quebec—have often gathered for parades and other celebrations. This photograph shows a 1903 Masonic 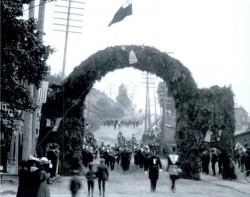 parade in Rock Island (below).

Members of Golden Rule Lodge No. 5 still make the annual trek to Owl’s Head Mountain each June. The excursion is open to all Masons. Each year, a candidate for the Master Mason degree at the meeting on top of the mountain, carries a wicker basket that contains ropes, the flags of Quebec, the United States, and Canada, and Masonic tools, including a Bible, and a square and compasses. This ongoing tradition illustrates the power of brotherhood to transcend political borders and war. Do you know of other border lodges like Golden Rule Lodge No.5? Let us know in the comments below 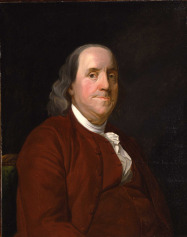 Boston-born Benjamin Franklin (1706–1790) established what became a successful printing business in Philadelphia as a young man. From an early age, Franklin developed and followed a philosophy of continual self-improvement. He also practiced this ideal in his community, helping found and improve organizations that contributed to individual and public good, including Freemasonry.

After he retired from business in his early 40s, Franklin turned his curiosity to his vast interests, including politics, science, philosophy, literature, and diplomacy. In Paris in the late 1770s, he successfully sought French support for the American fight for independence. He later served as ambassador to France for the new United States. Upon his return to Pennsylvania as a respected elder statesman, he became President of the Pennsylvania Assembly, helped shape the new nation at the Constitutional Convention, and worked to abolish slavery.

A Freemason for the Ages

Franklin became a Freemason as a young man, in 1731. In 1734, Benjamin Franklin produced the first book about Freemasonry that was printed in North America. Franklin based his Constitutions—which contained the history, laws, and regulations of Freemasonry—on the English edition published in 1723. Able and active, he served as Grand Master of Pennsylvania just three years later and as Provincial Grand Master of Pennsylvania in 1749. Alongside his many endeavors, Franklin held many lodge and Grand Lodge offices. Near the end of his life, his Pennsylvania brethren honored Franklin as “An illustrious Brother” of “distinguished merit” entitled to the “highest veneration.” 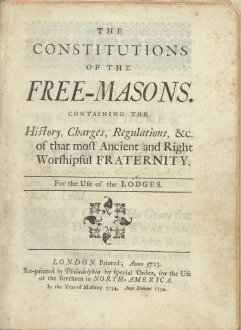 showcases inspiring American Freemasons and introduces visitors to the history of Freemasonry in the United States. The exhibition will be on view through October of 2024. Throughout the exhibition, visitors will meet extraordinary Masons, like Benjamin Franklin, who, through their outsized contributions to Freemasonry, government, the arts, and social justice, made a profound impact on their world and ours.

Posted at 01:20 AM in "The Masonic Hall of Fame: Extraordinary Freemasons in American History", Benjamin Franklin, Posts by Hilary Anderson Stelling | Permalink | Comments (0)