A Portrait of Samuel Larison, Freemason and Winemaker 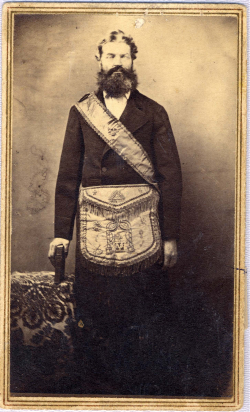 Around 1853 the subject of this photograph, Samuel Larison (also spelled Larrison), drawn by the promise of the Gold Rush, emigrated to California. Larison mined for a few years and “met with more or less success.” Eventually he left prospecting and purchased land to farm. He settled with his family near the town of Cloverdale in Sonoma County, California. There he became a pioneer winemaker, a cooper for the new wine industry, and a charter member of the town’s Masonic lodge.

In the 1870s Samuel Larison (1821-1899) advertised multiple times as a cooper, declaring, “Wine-Growers, Attention! Cooperage of all kinds on hand and made to order….” A note in the local paper detailed that he used white oak from neighboring Lake County to make wine-pipes (specialized wine barrels) that held 150 gallons (about 750 modern bottles of wine). Starting in 1868, he cultivated grapes, with 18 acres planted with Zinfandel, Burgundy, and other varieties by 1883. Ten years later one observer drew attention to his product, noting that on a visit to the Cloverdale Winery “a load of Burgundy grapes grown by Samuel Larison…were the best we ever saw.”

Larison had first become a Mason as a young man in Ohio. He was a member of Yuba Lodge No. 39 in Marysville from 1856 to 1857. Later he was one of the charter members of Curtis Lodge No. 140 in Cloverdale, founded soon after he settled in town. The lodge received its charter in 1860; that same year Larison served as the lodge’s Tyler. Decades later, his obituary recalled that Larison was “an ardent admirer of masonry and for fifty years was a member of that order.”

This photograph shows Larison wearing the regalia of a Royal Arch Mason sometime in the 1860s. His obituary stated that he was a “chapter mason,” or member of a Royal Arch Chapter. When Larison first became a Royal Arch Mason or which chapter he belonged to is not known. Though many details about Larison’s Masonic career remain to be uncovered, this portrait of Larison in his apron suggests the pride he felt in his association with the group.

Many years after this photograph was taken, Larison continued to demonstrate his devotion to Freemasonry. In 1895 he was the oldest living member of the lodge and attended an installation of lodge officers. The local paper recorded of Larison that on this occasion, even though he did not travel into to town often, “his fraternal love for Masonry was to[o] overpowering to resist this opportunity to meet again with his brothers.”

If you'd like to more photographic portraits in the Scottish Rite Masonic Museum & Library's collection, visit our online collections database or take a look at our flickr albums of cabinet cards and daguerreotypes.

Many thanks to Thomas Krummell, Assistant Grand Secretary/Recorder, Grand York Rite of California, for his help in researching Samuel Larison's Masonic activities in California.

Proceedings of the M. W. Grand Lodge of Free and Accepted Masons of the State of California (San Francisco, CA: Frank Eastman, Printer, 1857), 175.

Proceedings of the M. W. Grand Lodge of Free and Accepted Masons of the State of California (San Francisco, CA: Frank Eastman, Printer, 1860), 476.