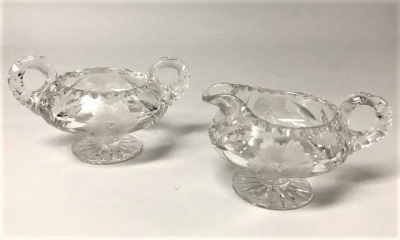 The sugar bowl and creamer pictured here are among the more recent gifts to the Scottish Rite Masonic Museum & Library's collection. The owner of this charming cut glass set displayed it in his home for many years. At the center of either side of each piece is a symbol used in Freemasonry, a six-pointed star, surrounded by rays.

An intriguing discovery during the cataloging process suggested that this set may possess a notable lineage, likely hailing from the era of glass manufacturing referred to by collectors as the American Brilliant Period. Glass formulas of this era, which lasted from about 1876 to 1917, typically included manganese as a clarifying agent. This element causes them to luminesce a light green shade under black light. We couldn't resist trying this test, and were rewarded with the mesmerizing results you see below. Combined with what we know about who owned them, we believe it is likely that these table wares were a product of this fascinating time.

In the late 1800s several factors converged to change the glass industry: large deposits of high-grade silica were discovered in the US, and around the same time, electric-powered machinery and assembly-line methods were ramping up production in American factories and allowing manufacturers to turn out increasingly sophisticated goods. Along with all this, surging prosperity led to a growing consumer demand for fancy table wares. Cutting shops multiplied, and American companies' designs soon garnered awards and fame at the 1889 Paris Exposition and 1893 World's Columbian Exposition. 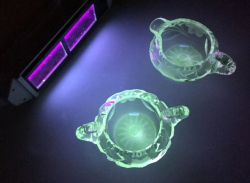 Glowing green under a black light.

The cut glass pieces of this period are characterized by intricate patterns and the ability to catch and reflect light particularly well. They were made of a type of glass with a high proportion of lead oxide. This ingredient effectively softened the glass, enabling it to be cut without shattering. Their manufacturing process started with the creation of thick “blanks” in the shape of the desired form. After being marked with a design, they underwent several stages of cutting and polishing on wheels of metal, wood, and stone. You can read more about the process, and see examples from this period—which ended abruptly when lead was needed for military purposes in World War I—at this website. Curious parties can delve into further examples of American cut glass here.

The manufacturer of our creamer and sugar bowl is not known. Many glass makers did not mark their products, or used paper labels which wore off over time. Cut glass from the late 1800s and early 1900s was comparatively durable and was popular in its day. These two qualities have contributed to the survival of cut glass objects in family collections. If you have any cut glass objects decorated with Masonic symbols, we’d love to hear about them in the comments below.

"Black Light Testing." The House of Brilliant Glass website, accessed May 29, 2021, at https://www.brilliantglass.com/black-light-testing/

Thanks for reading our blog, Eric! If you click on the picture to enlarge it, the cut symbol at the center of that flower-like design becomes a little easier to see.

With all due respect, it isn't intended to be a star surrounded by rays, it is a flower.