A Hawaiian Journey
Charleston’s Best Friend: A Freemason Provides an Intimate Look into the Development of the American Railway System

"When among Unionists these limbs were of course lost in the service of the Union": A Masonic Impostor During the American Civil War 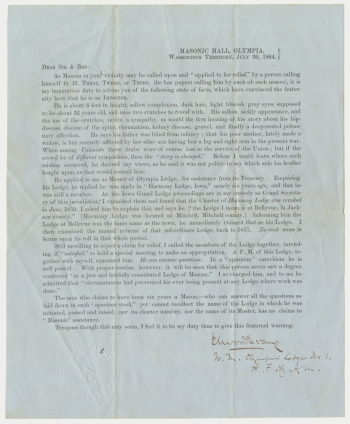 Long-time readers of our blog know that every May we return to the topic of our very first blog post: Masonic impostors. This year we highlight a document from our Digital Collections website, an American Civil War era circular letter warning other Masons of an itinerant Masonic impostor.

Olympia Lodge No. 1, a Masonic lodge in what was then Washington Territory - statehood would not come until 1889 - issued this letter warning other lodges to be wary of a man named "O. H. Treat, Tweed, or Treed," who had claimed to be a Mason and asked for financial help from the lodge.

Written by Elwood Evans, the Master of Olympia Lodge No. 1, this letter describes the appearance of "Treat" and his story claiming to be a Mason in need of assistance. The story is one that, Evans admits, upon first hearing, engenders sympathy:

He is about 6 feet in height, sallow complexion, dark hair, light blueish grey eyes, supposed to be about 32 years old, and uses two crutches to travel with. His sallow, sickly appearance, and the use of crutches, invite a sympathy, as would the first hearing of his story about his hip-disease, disease of the spine, rheumatism, kidney disease, gravel, and finally a deep-seated pulmonary affection. He said his father was blind from infancy; that his poor mother, lately made a widow, is but recently afflicted by her other son having lost a leg and right arm in the present war. When among Unionists these limbs were of course lost in the service of the Union; but if the crowd be of different sympathies, then the "story is changed." Before I could learn where such mishap occurred, he desired my views, as he said it was not politic to say which side his brother fought upon, as that would commit him.

However, as Evans described his attempt to determine whether "Treat" was indeed a Freemason, he encountered many red flags and conflicting statements. For instance, Evans noted that while "Treat" seemed very familiar with the various parts of known ritual exposures, he could not name the lodge he belonged to, despite claiming to have been a Mason for six years.

Are elements of the story told by the man known as Treat/Tweed/Treed true? Were any of those names his real name or were they all aliases? Was he a mere con artist or a man with a hard life seeking assistance on false pretenses during a time before government- and company-based insurance was commonplace? We may not find answers to these questions, but this document reminds us that even during times of conflict - perhaps especially during times of conflict - both Masons and those falsely claiming to be Masons sought aid from local lodges.