An Engraved Masonic Jewel from Ireland 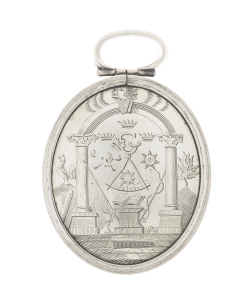 Last month we posted about the frontispiece to David Vinton’s The Masonick Minstrel: A Selection of Masonick, Sentimental, and Humorous Duets, Glees, Canons, Rounds and Canzonets and how this image was based on an advertisement for a Dublin jeweler, James Brush & Son, published in Smollet Holden’s A Selection of Masonic Songs. In creating the ad, the jewelry firm depicted one of their products—a Masonic medal—along with information about their services. Just as Brush’s ad inspired Vinton’s frontispiece, one of Brush’s medals may have been a source for some of the engraving on this jewel, part of the collection of the Grand Lodge of Masons in Massachusetts.

Brush’s ad featured—suspended on ribbons linking three columns—images of the back and front of one of his medals. Brush produced these medals in multiples and examples survive to the present day. Cleverly, Brush created an ornament that would appeal to Freemasons holding different degrees by designing two options for one side of the medal—one with Royal Arch symbols, the other featuring symbols from the Knight Templar degree. At the time Brush produced his medals, Irish Masons received Royal Arch and Knight Templar degrees in craft lodges. Both Bush’s Knight Templar and the Royal Arch medals featured the same design, a selection of symbols associated with the craft degrees, on the other side. Brush joined the two sides of the medal with a molded rim secured by a hinged hanging ring. The finished medal, composed of two sides and a rim, was hollow inside.

Intriguingly, the collection of the Grand Lodge of Masons in Massachusetts holds a jewel bearing some designs that are similar to symbols on Brush’s medals—for example, the ornate letter G surrounded by three crowns—but the symbols on this jewel are engraved onto the jewel’s surface, rather than expressed in relief, as they are on Brush’s medals. As well, the symbols on the side of the engraved jewel with the letter G on it relate to both the Knight Templar and Royal Arch degrees—and the compasses and arc at the center of the jewel, may refer to the Past Master degree or status (pictured above). On the side of the jewel related to the craft degrees, the selection and arrangement of symbols differs quite a bit from Brush’s version (pictured below). To represent the craft degrees, the engraver who ornamented this jewel included a large all-seeing eye, a motto ("Sit Lux Et Lux Fuit," Let there be light and there was light), and Masonic tools (a square and compasses, a trowel, a plumb, a level, a mallet, and a rule), along with other symbols (two columns, a sword, a sprig of acacia, and the 47th Problem of Euclid). Like Brush’s medals, the two sides of this jewel are held together with a molded rim fixed with a hinged suspension ring. The sides of the engraved jewel are oval in shape and slightly convex.

Whether the engraver who decorated this jewel looked to Brush’s medals or advertising for inspiration is uncertain. It is possible that the engraver may have drawn his ideas for how to arrange and depict Masonic symbols from the same printed or material sources as Brush. That said, the mix of symbols on this engraved jewel and the way it was constructed may be clues that it is of Irish origin.