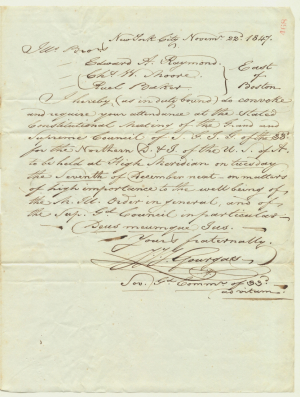 Pictured here is a recently digitized handwritten summons from Sovereign Grand Commander John James Joseph Gourgas (1777-1865) to Edward A. Raymond (1791-1864), dated November 22, 1847. It is among a number of recently digitized nineteenth-century Scottish Rite documents that we have added to the Van Gorden-Williams Library & Archives Digital Collections website. By taking a closer look at the events surrounding the creation of this summons, we can gain insight into the difficult reorganization of the Scottish Rite that took place in the 1840s.

This 1847 summons gives us a glimpse into this period of rebirth. Written in Gourgas's unmistakable handwriting, and addressed to Edward A. Raymond in Boston, the summons directs Boston-based members Raymond, Charles W. Moore, and Reuel Baker to attend the "Stated Constitutional Meeting of the Grand and Supreme Council" to be held on December 7, 1847. The record of that meeting shows how difficult it was for Gourgas to rebuild the Council. The December 7, 1847 meeting was attended by only three people: Gourgas, Yates, and Van Rensselaer. In the published Proceedings, Gourgas notes that Raymond, Moore, and Baker provided an official excuse for non-attendance, which was accepted. Showing his frustration with members who did not attend meetings, Gourgas mentions that two members - John Christie and Archibald Bull - had not made an appearance at any meetings since they had been admitted and, in strong language, declared them "useless members, unless they come forward with admissable excuses..." In a letter, dated January 20, 1848, written in response to Gourgas's wish to hear from Bull and Christie, Bull explains to Gourgas that his absences occurred because of his poor health.

As the events surrounding this summons demonstrate, the robust Supreme Council that eventually emerged from the work of Gourgas and Yates was not easily accomplished.

Interested in reading more primary sources related to the history of the Scottish Rite? Be sure to check out the growing collection on our Digital Collections website.

Caption:
Handwritten summons from Sovereign Grand Commander John James Joseph Gourgas to Edward A. Raymond, 1847. Gift of the Supreme Council of the Northern Masonic Jurisdiction of the Scottish Rite, A2019/178/0001.