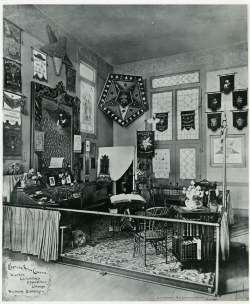 Thank you for reading the blog and thanks for sharing your World's Fair experience! We are interested to hear about the different ways fraternalism was represented in these events over the years.

Thanks for this. I love any story that combines my love of fraternalism with my childhood obsession with World's Fairs - ever since I visited the Freemasonry pavilion at the New York Fair in 1963 in Flushing Meadow at the age of 5. A few years ago I stumbled across a reference to the Temple of Fraternalism at the St. Louis Fair in 1904 (oddly enough, I believe its image was incorporated into a cigar company label). Apparently it had a pair of large, generic lodge rooms and was a gathering point for any fraternal group who wanted to book a lodge meeting in it. And if memory serves, it was dismantled after the fair and the whole building was relocated to New Mexico as a hospital office building. Now I have to go look it up...