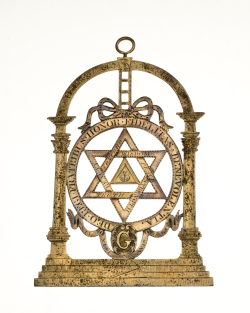 This elaborate gilded Royal Arch jewel belonged to Lambert Keatting (1773-1847), a member of Harmony Holy Royal Arch Chapter No. 52 in Philadelphia. Founded in 1794, the chapter—like others in Pennsylvania at the time—worked under the authority of a craft lodge warrant issued by the Grand Lodge of Pennsylvania and took its name from that lodge, Harmony Lodge No. 52. In spite of its connection with Harmony Lodge No. 52, the chapter drew its membership from several different craft lodges in Philadelphia. Lambert Keatting belonged to Lodge No. 67, where he was elected Master in 1811 and 1812. Later, in 1820, he became a member of Lodge No. 2, also in Philadelphia.

A boot and shoemaker, Keatting joined the Harmony Holy Royal Arch Chapter No. 52 in 1810. A few years later, in 1816 and 1817, he served as the presiding officer, or High Priest, of the chapter. Around the same time, he was appointed to be the Senior Grand Deacon at the Grand Lodge of Pennsylvania. Keatting had a life-long connection to Freemasonry. When he died, in 1847, his friends and acquaintances were requested to attend his funeral. The notice of this event in the newspaper invited specifically, “The Brethren of the Masonic Order generally, and particularly Lodge No. 2….”

Keatting’s intriguing jewel, part of the collection of the Grand Lodge of Massachusetts, appears to have been made from two separate jewels(at left). The inner jewel—the round element topped with a bow at the top a banner at the bottom—is a Royal Arch jewel . This style of jewel—in the shape of a circle containing two interlaced triangles—was first worn by English Royal Arch Masons in the mid-1700s. On this jewel, at the center of the star, is a triangle that, on one side, has an engraving of a compasses surrounding a globe, and, on the other side, a circle with the letters of the mnemonic associated with the Mark Master Degree (below, at left). The space within the circle is left blank, suggesting that Keatting may have not taken the degree. Or, if he did, he did not have his personal mark or emblem engraved on this jewel. The banner at the base of the jewel threads beneath an oval with the letter G (a symbol for God or geometry) engraved on it. On the circle and on the arms of the triangle, on both sides of the jewel, an engraver cut phrases in Latin, English, and Greek that relate to the Royal Arch Degree (you can read about these inscriptions here, as they appear on another Royal Arch jewel made in England around 1791). On the back of the jewel, the engraver added Keatting’s name on one of the horizontal arms of the triangle, as well as a Latin phrase and the date (1810) on the circle. On the back of the jewel, the banner at the bottom bears the name of Keatting’s chapter, Harmony Royal Arch Chapter.

The outer element of the jewel is in the shape of an arch supported by two columns, spanned by four steps at the base. At the peak of the arch, above a keystone engraved with an all-seeing eye, is a hanging loop. A ladder (representing Jacob’s Ladder) connects the arch to the bow at the top of the round jewel. To join the arch to the round jewel, a craftsman cut away part of the bow. The round jewel is also connected to the inner sides of the columns and the top of the stairs. On the back side of the jewel, at the base, an engraver cut the initials of the name of the chapter and its number, “H. H. R  A. C. N[o] 52.” This inscription suggests that the arch and columns surrounding Keatting’s jewel may have come from a jewel owned by the chapter. Why Keatting’s jewel and another were joined together is unknown. If you have an idea or theory, we would love to hear  it. Please share it in the comments section below. 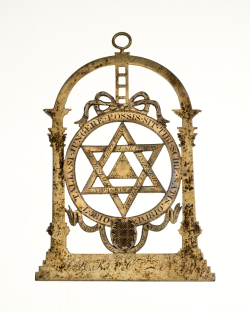 Back, Royal Arch Jewel, 1810. Philadelphia, Pennsylvania. Collection of the Grand Lodge of Masons in Massachusetts, GL2004.6656.

Joshua L. Lyte, Reprint of the Minutes of the Grand Lodge of Free and Accepted Masons of Pennsylvania (Philadelphia, PA: The Grand Lodge, 1897). 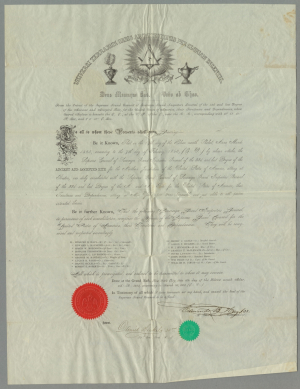 Do you have a question about Scottish Rite history? We'd love to hear from you. Head over to the Library & Archives page on the museum's website to get in touch with us.