Experience Some of Patriots' Day Online 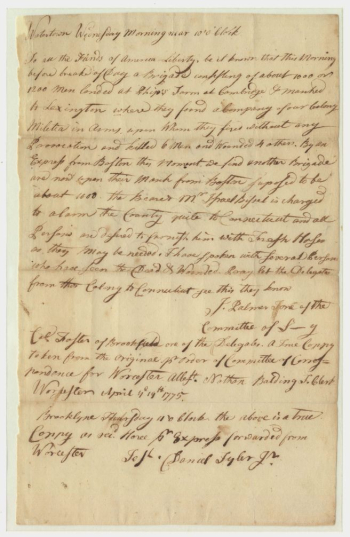 This year marks the 245th anniversary of the Battle of Lexington. During any other year, you can usually visit us in person at the Scottish Rite Masonic Museum & Library around Patriots’ Day, when we normally exhibit one of the highlights from our collection: an original copy of the Lexington Alarm letter. Our letter is one of several created by colonists to inform other colonies about the Battle of Lexington and the outbreak of war with England. It is as close as contemporary viewers can get to the beginning of the American Revolution. While all of the Patriots' Day activities and events around Lexington and the rest of Massachusetts have been canceled this year, we wanted to remind you that you can still get an up close look at the Lexington Alarm letter through the high resolution images of it that are available to everyone through our Digital Collections website.

The original alarm letter was written by Joseph Palmer just hours after the Battle of Lexington which took place around daybreak on April 19, 1775. Palmer, a member of the Committee of Safety in Watertown, Massachusetts, a town near Lexington, had his letter copied by recipients along the Committee of Safety's network so that the message was distributed far and wide. While the original alarm letter written by Palmer is thought to be lost, the Museum & Library has in its collection this copy of his famous warning, which was written the day after the Battle of Lexington by Daniel Tyler, Jr., of Connecticut.

If you want to do a little more armchair traveling, be sure to check out a blog post we published over a decade ago, which traces the route that the alarm letter took from Watertown, Massachusetts down to New York City.

And we hope to see you in person in April of next year for the 246th anniversary of the Battle of Lexington, when you can once again see this exciting piece of American history in person.

Many thanks for reading our blog. If you click on the link to our digital collections site in the blog post above, we have a transcription of the letter there, along with the object. (Just visit this page and scroll down: https://digitalvgw.omeka.net/items/show/497).

An easily readable transcription of the letter would be convenient.