"Cartomania" and Sitting for a Carte-de-Visite Portrait 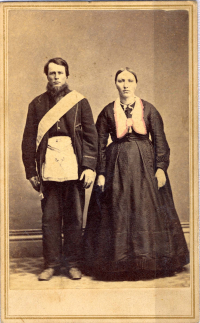 The Scottish Rite Masonic Museum & Library holds over two hundred cartes-de-visite, or small souvenir photographs mounted on stiff card backings, in its collections. Though diminutive in size (approximately 2-1/2 by 4 inches), these cards were immense in popularity in the US and Europe during the mid-1800s, as they offered a much more affordable and convenient way to have one’s likeness reproduced than had been previously available. Patented in 1854 by French photographer André Adolphe-Eugène Disdéri (1819-1889), cartes-de-visite soon came to dominate the photography market, with “cartomania” reaching its apex around 1862. More like baseball cards than calling or visiting cards, cartes-de-visite were traded among friends and acquaintances, who collected them and put them into specially made albums. Stationery shops sold cards depicting celebrities and well-known figures, as well. 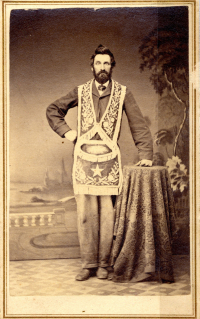 The experience of having one's photograph taken for a carte-de-visite was detailed with humor and wit by none other than Charles Dickens (1812-1870) in an 1862 issue of the weekly literary magazine he founded, All the Year Round. For all the delights of these cards, Dickens noted, sitting for one was "not a pleasant performance to go through." After entering the "dismal house" where the typical studio was located, the subject was shown into a cramped, darkened space strewn with well-worn props; "dazzled and oppressed by the glare of light above his head" the sitter in his "environment of pillar and curtain" had to hold his pose for the "utterly exhausting" thirty seconds it took to capture the likeness. "Terrific are the temptations of those thirty seconds," Dickens observed, when the sitter had to keep perfectly still and hold a steady gaze on some doorknob or keyhole. His account goes a long way in explaining the serious or stiff expressions on many subjects' faces.

Cartes-de-visite were more than just a cultural craze, however. These small portraits offered a new medium for documenting and preserving one’s identity and allegiances. They were very popular with soldiers during the Civil War. As shown in the Scottish Rite Masonic Museum & Library’s collection (a sampling of which can be seen here), Freemasons and members of other fraternal organizations used them to convey information about their affiliations and achievements. 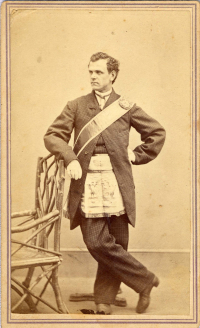 Eventually, the carte-de-visite was eclipsed in the realm of popular portraiture by the cabinet card, which was larger and therefore more eye-catching to display. The Scottish Rite Masonic Museum & Library will feature examples of cartes-de-visite, cabinet cards, and many other types of portraits in its upcoming exhibition, "What's in a Portrait?" To keep in touch while the Museum & Library is closed due to the stay-at-home advisory in Massachusetts, please join us on Facebook and check out our online exhibitions and online collections. And, as always, we welcome your comments below.

Richard, That's a fascinating idea; perhaps one day it will be possible. Thanks for your comment, and for reading the blog! -Alyssa

I wonder if someday facial recognition could help us to identify people in our old pictures, and save important historical images.

Thanks for your interest, Susan! We hope you'll be back to our blog soon. -Alyssa

Fascinating. I never knew what cartes de visite were before. Thanks.