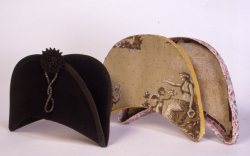 Continuing along the lines of last week’s post, here we’ll look at another meticulously crafted hat at the Scottish Rite Masonic Museum & Library: a folding bicorne-style hat, pictured to the left. Stylistically related to the tricorne hat and an antecedent to the formal top hat popular in the 1900s, the bicorne could be conveniently folded and tucked between the arm and body when removed. For this reason it was also known as a chapeau-bras or “under the arm” hat.

This extraordinary example, with its own hand-made case, is from the collection of the Grand Lodge of Masons in Massachusetts, cared for at the Scottish Rite Masonic Museum & Library. Thought to date to the 1830s, this hat was owned by William Pierce, Jr. A member of the Boston Commandery, No. 2, Pierce may have worn this headgear as part of his regalia. If so, it would be one of the earliest known items of Knights Templar regalia in New England. In the image below, you can see one example of the full regalia of this Masonic order as it would have appeared slightly later, in the 1850s-1860s (although the hat pictured in this image was not a folding type). While Knights Templar regalia has changed over time, the bicorne hat, or chapeau, often adorned with an ostrich feather, remains a distinctive element of it. 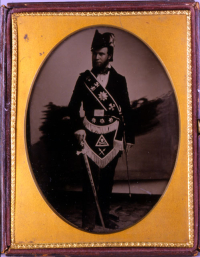 Like many fine hats manufactured in the early 1800s, the one shown above was made from beaver pelt instead of the more affordable (and less water-repellent) wool felt. Beaver hats, as all styles of hat from this pelt were known, were labor intensive to create. To felt (or mat down) the fur of the pelt, hatmakers first had to remove its longer, coarser hairs. Then they brushed it with a solution of mercuric nitrate and washed, dried, and shaped it. The phrase “mad as a hatter,” incidentally, arose from a very real phenomenon, as the fumes created during this process gave workers terrible symptoms of mercury poisoning such as tremors, confused speech, and vision disturbances. Luckily for both beavers and hatters, by the mid-1800s silk plush and other materials began to supplant beaver pelt in hat fashions.

To keep in touch while the Scottish Rite Masonic Museum & Library is closed due to the stay-at-home advisory in Massachusetts, please join us on Facebook, and check out our online exhibitions and our digital collections. And, as always, we welcome your comments below.

Dear Maureen, Thanks for reading our blog! I hope someday we'll help you with another Jeopardy! question. Best, Alyssa

I opened this to read today. I watched an episode of Jeopardy! last week and the question was "What is a bicorne hat." I said to myself, "I never heard that term before?!" So this is what it looks like!! Thank you!