New to the Collection: A Mark Medal Made for Thomas Colling 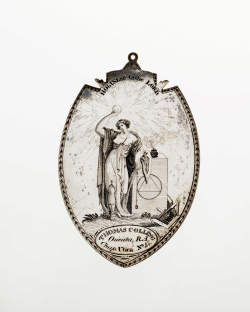 The Scottish Rite Masonic Museum & Library recently added an elegant and distinctive mark medal to its collection. In 1817, the owner of this medal, Thomas Colling (d. 1859) received the first three degrees at the newly founded Utica Lodge No. 270, in Utica, New York. The same year, the Grand Chapter of New York gave area Freemasons permission to establish Oneida Royal Arch Chapter No. 57. Thomas Colling joined this organization as well. Sometime after he received the Mark degree at the chapter, he commissioned this sophisticated mark jewel (at left).

Colling’s jewel is a shield-shaped. One side bears the motto of the Royal Arch, “Holiness to the Lord” at the top. At the point of the shield, the engraver cut block and script letters spelling out Colling’s name and chapter within an oval. The center of the medal features a female figure holding a ball and a plumb line, leaning against a plain block with a triangle within a circle drawn on it that supports an urn. A group of Masonic tools, a book (likely a Bible), a compasses, a mallet, and a level, are at the bottom of the block. The figure on Colling’s jewel, dressed in robes and sandals in a classical style, could possibly represent Fortuna, the Roman goddess of fortune, chance, and luck.  She was usually identified by the attributes of a ball, wheel, or cornucopia.

In the early 1800s, the Masonic virtues of faith, hope, and charity, were sometimes represented by female figures shown with particular attributes. Faith carried a cross or Bible, Hope held an anchor, and Charity nursed or carried children. For his mark, engraved on the other side of the medal, Colling selected the virtue of hope (at left, below). The craftsman who engraved Colling’s jewel depicted hope as a woman on the shore, with a ship in the distance, gesturing upward and stepping on a large anchor half obscured by her skirt. At the top of the jewel, the craftsman engraved a square, compasses, and Bible. At the tip of the shield, he depicted a shovel, pick, and rod, the working tools of the Royal Arch degree.

An adept engraver decorated Colling’s medal using a number of techniques such as, line engraving, roulette work, and stipple. Although the name of this engraver is unknown, we hope further research will help uncover more about the craftsman who ornamented this jewel. If you have any suggestions or ideas about this medal, please leave them in the comment section below.

Many thanks to Joseph Patzner of the Chancellor Robert R. Livingston Masonic Library at the Grand Lodge of New York. 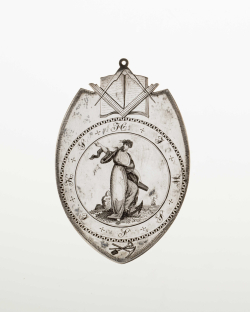