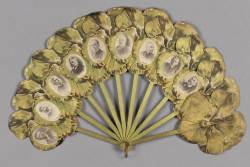 Manufacturers made a variety of political and military memorabilia in the late 1800s and early 1900s commemorating William Mckinley’s (1843-1901) presidency and the Spanish-American war (April 1898-August 1898). This 1900 fabric and wood fan featured black and white photographs of President William McKinley, Assistant Secretary of the Navy Theodore Roosevelt (1858-1919), and seven U.S. naval military leaders who participated in the Spanish-American war, including Admiral George Dewey (1837-1917) and William Rufus Shafter (1835-1906), also known as “Pecos Bill.”

The United States won the brief conflict and effectively ended Spanish rule in the Americas. Their victory produced a peace treaty, in which Spain ceded control of Cuba and relinquished control of Guam and Puerto Rico to the United States. In this same treaty Spain also agreed to sell the Philippines to the United States for $20 million. The U.S. Senate ratified the treaty on February 6, 1899, by only one vote. Author Cynthia Fendel noted that these popular patriotic photographic fans also sometimes featured McKinley’s presidential cabinet or the American and Cuban flags.

This recently donated fan is part of a collection of nearly fifty campaign and memorial items related to President and Freemason William McKinley. Many of these items are currently on display at the Museum & Library. Visit our website to learn more about these items.