The Art of Storytelling
American Institution and Mason: Irving Berlin 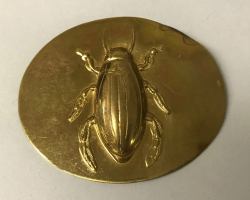 The Scottish Rite Masonic Museum & Library recently acquired a collection of nearly fifty campaign and memorial items related to President and Freemason William McKinley (1843-1901). These items add to the many objects already in the collection associated to McKinley’s involvement in Freemasonry, his campaigns, and his unexpected death.

Several of these items will be displayed in our upcoming recent acquisitions exhibition, including this “gold bug” pin, pictured at left. The pin, a campaign item from McKinley’s first 1896 presidential campaign, signified McKinley’s support for the gold standard platform. Advocates for McKinley and the gold standard, sometimes referred to as “gold bugs,” believed that the country’s monetary system should be backed only by gold. McKinley’s presidential opponent, William Jennings Bryan (1860-1925), and his supporters, sometimes called “Silverites,”  advocated against the gold standard, and believed that currency should be redeemable in silver as well as gold.

As debates about the gold standard consumed the election campaign, McKinley supporters began to wear “gold bug” pins, buttons, and ribbons. The pins were often in the shape of a large scarab beetle, sometimes made with wings. Bryant supporters wore similar silver bug pins to show support for their candidate. Ultimately, McKinley won the 1896 election with Garret Hobart (1844-1899) as his Vice President and signed the Gold Standard Act into law on March 14, 1900. The act established gold as the sole basis for redeeming paper currency.

The pin and other McKinley items will be on display at the Museum & Library beginning in October 2019.