A Past Master's Jewel from London 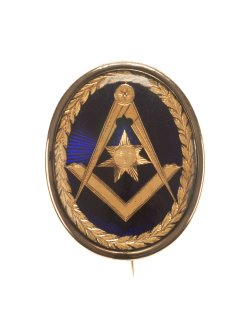 Last month we posted about a Past Master’s jewel in a style that was distinct to the Boston area.  In the past, we’ve talked about examples of a popular style of Past Master’s jewel that was widespread in New England in the early 1800s. Made around the same time as these jewels--but in a entirely different style--is this jewel (at left), crafted for London Freemason Robert Scholl (ca. 1781-1832).

Listed as a gentlemen in membership records, Scholl worked as a Navy agent, with chambers at Clement’s Inn, in the early 1830s.  He was initiated at the Lodge of Union No. 275 in 1814 and served as Master of his lodge before 1820.

To thank him for his service in that role, Scholl’s brethren at the Lodge of Union commissioned this gold and enamel jewel.  They had Scholl’s jewel inscribed with a heartfelt message (see below), noting that the elegant badge was, “...a testimony of their fraternal Regard — their Personal attachment and the Sense entertained by them of his exertions for the Benefit of the Lodge.”  Scholl’s jewel is like a watch or locket in that the decoration on the front is protected by a glass bezel.  The bezel covers elements cut from gold in the shape of a square and compasses and a sun. A border of leaves, likely laurel, surrounds the symbols.  All of the gold elements are detailed with engraving to give them depth and definition. The symbols appear to float over a background patterned by machine turning and enameled dark blue.  The deep color contrasts with the bright gold symbols.  An engraver added the inscription on the back of the jewel.  Using the pin on the back, Scholl would have worn this jewel on his coat.

What extraordinary service Scholl may have undertaken for his lodge is not known, but this handsome jewel suggests how highly this brothers at the Lodge of Union valued his contributions. 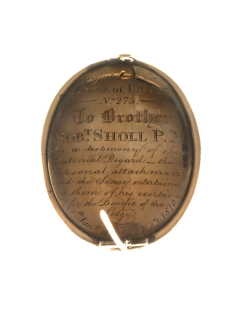