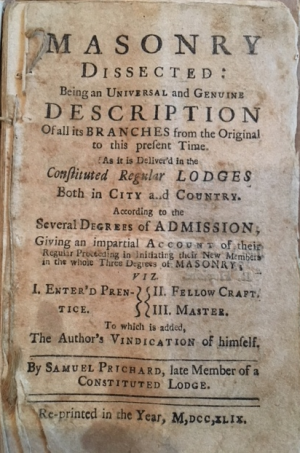 Through a recent donation, the Scottish Rite Masonic Museum & Library acquired the very rare book pictured here. It is one of only three copies of the 1750 edition of a famous Masonic ritual exposure that are known to exist. Generously donated by the granddaughter of Roger Keith (1888-1968), Past Grand Master of the Grand Lodge of Massachusetts from 1948-1950, this 32-page pamphlet is a 1750 reprint of a Masonic ritual exposure originally printed in London in 1730 (see a digitized version here). The book was reprinted several times in London between 1730 and 1750, but this is the first American edition of the book.

The book is reprinted verbatim from earlier London editions, although the book also contains references to a sermon by Charles Brockwell that was not published until January 1, 1750. The title page does not say where or by whom the book was printed, noting only that it was done in 1749. Bibliographer Kent Walgren explains the discrepancy between the publication date and the quotation from the 1750 Brockwell sermon by noting that, "prior to 1752 the legal year began on Annunciation Day, March 25. [The book was therefore] probably printed between 1 Jan. and 25 Mar. 1749/50." (Read more about the 1752 calendar change here.)

Walgren makes a case for this book having been produced at Newport, Rhode Island, by Ann Smith Franklin (1696-1763), Benjamin Franklin’s sister-in-law, and a printer in her own right. Walgren suggests that the book might have been issued to exploit the public's interest in Joseph Green's Entertainment for a Winter's Evening, an anti-Masonic satire of Charles Brockwell's Brotherly Love Recommended in a Sermon Preached before the Ancient and Honourable Society of Free and Accepted Masons in Christ-Church, Boston, on Wednesday the 27th of December, 1749 (see a digitized copy of that book here). Both were published in 1750.

Walgren also notes that, although the text of Masonry Dissected is a Masonic ritual exposure, the book might have been printed for Freemasons, as an aide-mémoire for the members of Newport's first Masonic lodge. The Provincial Grand Lodge in Boston chartered this lodge on December 24, 1749. Freemasons purchasing ritual exposures may not be as strange as it seems at first. At a time when officially-sanctioned printed Masonic ritual was not available, the biggest customers for ritual exposures were likely not opponents of Freemasonry or curious non-members, but instead Masons themselves. For more on this topic, be sure to check out earlier blog post, Are Early Masonic Ritual Exposures Anti-Masonic?

Do you have a rare book that you'd like to donate? We'd love to hear from you! Send us an e-mail and tell us more.