In 1801 the bylaws of the Grand Lodge of Massachusetts specified that Master Masons be provided with a “diploma, printed on parchment, with a device emblematical of, and suited to, the Genius and Design of Masonry….” As described in this regulation, the document would also mention that the holder’s lodge had been authorized by the Grand Lodge and would bear the signatures of the Master Mason, his lodge’s officers and the Grand Secretary. This diploma, when presented at another lodge, helped prove the holder was a Mason in good standing—a brother entitled to a warm welcome, hospitality and, in some cases, charity.

From surviving examples dated after 1801, it appears that Boston artisan Samuel Hill (c. 1765-c. 1809) engraved a version of the diploma outlined in the 1801 bylaws. His design featured allegorial  figures, representing faith, hope, and charity, surrounding a globe resting on a plinth. On the globe, the details about the Master Mason and signatures of lodge officers were filled in.  The Grand Secretary attested to the lodge’s status on lines printed for that purpose on the face of the plinth. 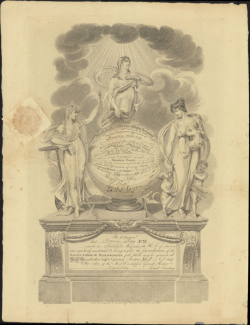 By 1811, a committee of the Grand Lodge “were of the opinion” that the distribution of new diplomas “requires some new regulations.” The following year the Grand Secretary noted that the engraved plate from which the certificates were printed was “so worn that fair and legible impressions could no longer be taken from it.”  At the same meeting a committee was appointed to “order such repairs on the plate…, or procure a new engraving, as they may deem expedient….” That year an English artist working in Boston, John Reubens Smith (1775-1849), engraved a fresh plate  (pictured at left) based on Hill’s earlier design.

Only five years later, in 1816, another committee recommended that the diploma plate be repaired or a new one ordered.  In 1817 this committee developed a “new form for a Master’s Diploma.”  The Grand Lodge approved the form and gave permission for the committee to have it “engraved and made ready for use.” To undertake the engraving work, the Grand Lodge turned to the partners, George Girdler Smith (1795-1878) and William B. Annin (1791-1839). The pair likely met as fellow apprentices with the Boston engraver Abel Bowen (1790-1850). They went into business together around 1816.  John Ritto Penniman (1782-1841), a Boston artist, designed the new diploma with an artist identified only as Mills.

In 1819 both Annin and Smith received their Masonic degrees in Boston; Smith at Columbian Lodge, Annin at The Massachusetts Lodge. Smith became an active Mason, both holding offices at the blue lodges he belonged to and at the Grand Lodge. As partners, Annin and Smith engraved certificates for many organizations: the Grand Chapter of Massachusetts, fire companies, missionary societies and other associations.  They also produced illustrations and maps for numerous publications. The pair dissolved their partnership around 1833. Annin died by suicide six years later. 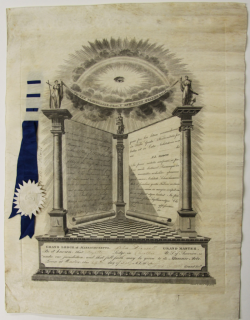 Based on signed and dated surviving examples, the Grand Lodge began using Annin and Smith’s diploma in 1819. After his partnership with Annin ended, it appears Smith retained the plate for the diploma and produced copies for the Grand Lodge as requested.  In 1857, prompted by a query about a bill from the Grand Lodge, Smith described his long-standing arrangement with the organization: “The Master Mason’s Diploma belonging to the Gd Lodge of Mass. was to the best of my recollection, engraved about the year 1820.  The price of Diplomas was then I believe 75 cts., including parchment of course….”  Annin and Smith's engraving enjoyed a long run as the Grand Lodge's diploma. The Grand Lodge issued it to new Master Masons through the 1850s.

Proceedings of the Most Worshipful Grand Lodge of Ancient Free and Accepted Masons of the Commonwealth of Massachusetts 1792-1815 (Cambridge, Massachusetts: Caustic-Claflin Company, 1905) 193, 415, 504, 529.

Proceedings of the Most Worshipful Grand Lodge of Ancient Free and Accepted Masons of the Commonwealth of Massachusetts 1815-1825 (Cambridge, Massachusetts: Caustic-Claflin Company) 58-59, 74-75, 126.

Proceedings of the Most Worshipful Grand Lodge of Ancient Free and Accepted Masons of the Commonwealth of Massachusetts 1856-1864 (Cambridge, Massachusetts: Caustic-Claflin Company) 71, 100-103.