The Fantastic Tale of George A. Gardiner
10 Years of Blogging - and Masonic impostors!

A Real Nest of Owls 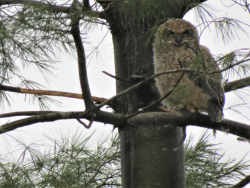 For the last month or so, staff and visitors to the Scottish Rite Masonic Museum & Library have been charmed by a pair of Great Horned Owls living on a tree on the Museum’s grounds.  The owls, a mother and owlet (pictured at left), made their home in a disused hawk’s nest in an evergreen tree near Mass Ave. The baby owl, nicknamed Scottie, started as a fluffy gray puff.  S/he, fueled by owl treats brought to the nest by the mother, soon grew bigger and bigger and developed an increasing number of brown feathers. Fascinated, staff were eager for owl information—the great website All About Birds, was particularly helpful.  Using their newly acquired knowledge, staff identified one of the baby owl’s behaviors: “branching,” or walking on branches, a first step to learning to fly and to achieving owl independence.  So far this week, neither the mother or baby owl has been spotted, leading us to suppose that the owl family has left the nest.  We are already hoping an owl comes to visit us again next year. 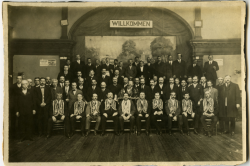 In the meantime, we are happy to remind blog readers that we  have material in the collection related to some of the fraternal groups related to the Order of Owls.  Several groups claimed variations on the name, one founded in 1904 in Indiana (the Order of Owls), another (the American Order of Owls), that became the Fraternal Order of Orioles in 1910 (you can read a post about them here) and the Afro-American Order of Owls (later the Afro-American Order of Orioles) that was active in the first decades of the 1900s.  This photograph (at right) shows a "nest" or local group of the Order of Owls. Like other Masonic and fraternal groups, Owls wore aprons.  You can see at least one in the photograph.  This blue and white one (at left, below) may have belonged to Boston area member Edward A. Vogel who served as the President of Boston Nest No. 130 in 1911 and 1912.

If you have a connection to an Owls group, or material related to a member or nest, we'd love to know more.  Tell us about it in the comments section below. 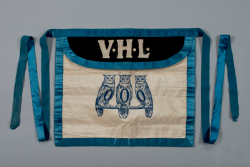 Dear Taylor,
Thank you for reading the blog and for the information. We are always looking for more information about the Owls and other fraternal groups.
Ymelda Rivera Laxton, Assistant Curator