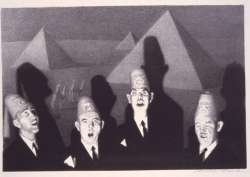 In 1937 Grant Wood (1891-1942) started making lithographs for the Associated American Artists, an art gallery in New York.  Living in Iowa, Wood planned his prints there, executed them on lithographic stones the gallery provided and then sent them to New York for printing. From 1937 through 1941 Wood created 19 lithographs. Associated American Arts sold Wood’s prints, along with others they had commissioned from well-known artists, by mail order and in their gallery. Their innovation was to offer work by popular fine artists to consumers at affordable prices—Wood’s black and white lithographs originally sold for $5 each. Wood lauded the gallery’s business model, writing:

I am very enthusiastic about the Associated American Artists organization. People who cannot afford to pay hundreds or thousands of dollars for original paintings cannot afford to have original, signed works of the favorite contemporary American artists in their homes.  It is, in essence, a democratic experiment....

Most of Wood’s work for the firm treated rural scenes and agricultural activity. This 1939 lithograph, part of the Scottish Rite Masonic Museum & Library’s collection, portrays a different kind of subject. In it Wood showed four members of the Shrine as they sang. Dressed for a meeting, the singers' distinctive fezzes cast elongated shadows against a background of pyramids and camels. Wood's scene is evocative and sympathetic. Though a Mason, Wood is not thought to have joined the Shrine. He took his degrees at Mt. Hermon Lodge No. 263 in Cedar Rapids in 1921. Three years later he was suspended for not paying his dues. However, he was likely have been familiar with the Shrine through his involvement in Freemasonry and because a temple met in his hometown.

Wood explored Masonic themes in another work, The First Three Degrees of Freemasonry, a large tryptic commissioned for the National Masonic Research Society in 1921. The painting is now part of the collection of the Iowa Masonic Library at the Grand Lodge of Iowa. Though usually displayed at the library, the painting is currently featured in an exhibition about Grant Wood.  You can see the exhibition at the Whitney Museum of American Art in New York City where is is on view through June 10, 2018.

Many thanks to Bill Kreuger of the Iowa Masonic Library at the Grand Lodge of Iowa.