The Odd Fellows Home in Liberty, Missouri
Love Model Trains? Come to the Train Show this Weekend, 17 and 18 February 2018

Maps of the American Revolution: On View Starting 3 February 2018 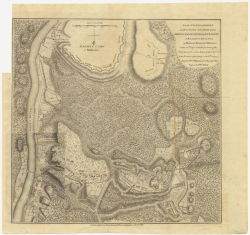 Rich with information, historic maps can tell us a lot about the past.  Although maps convey facts, no map is neutral; each has its own purpose and bias. Mapmakers, like other authors, had a point of view that informed the choices they made about what to include, emphasize or leave off their portrayal of a location or event.  The fourteen maps displayed in Maps of the American Revolution, on view at the Scottish Rite Masonic Museum & Library starting Saturday, 3 February 2018, were produced, primarily in London, from 1775 to 1794.  They describe military engagements that took place during the American Revolution.

During the American Revolution, the British government sought surveys and maps that would help them better understand the topography and resources in the American colonies and, with this information, hoped to win the conflict.  The government and military leaders on the ground relied on existing maps, soldier cartographers, surveyors and engineers to produce the maps they needed.  Some of these maps, originally sketches produced in pen and ink, were later engraved, published and sold to the general public. In offering these maps, publishers satisfied their customers’ interest in events that took place in the often unfamiliar landscapes where British soldiers and colonists vied for territory.  These maps, sometimes available just months after the events they depicted, helped English citizens follow important actions during the American Revolution.

When the war ended and combatants signed the treaties that reshaped contested areas, mapmakers continued their work.  Among the maps they published were maps that helped tell the history of the conflict.  These allowed interested readers and military professionals to look back and understand—or argue about—how events unfolded.  Several of the maps on view in the exhibition, such as the one pictured at left which shows one of the battles at Saratoga, New York, were engraved and printed a few years after the conflict they depict.  British Army officer William Wilkinson, who had participated in the battle, created the pen and ink map upon which this printed map was modeled while he was a prisoner of war.  Another map, the Plan of the Siege of York Town in Virginia, pictured below, was  published in a written history of the war released in 1794.  Today these maps and others help tell the story of the American Revolution.

Maps of the American Revolution, in the Scottish Rite Masonic Museum’s corridor space will be on view from Saturday, 3 February 2018, through Saturday, 2 February 2019. 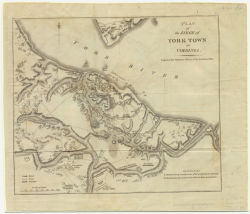 Plan of the Siege of York Town in Virginia, 1794. Published in Charles Stedman’s, The History of the Origin, Progress, and Termination of the American War, London, England. RARE G3884 .Y6 S3 1794