New to the Collection: Masonic Pitcher Owned by Charles Copeland 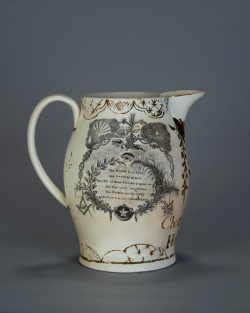 In the late 1700s and early 1800s English pottery manufacturers sold great quantities of light colored earthenware, called creamware, to the American market.  Much of it was plain tableware, but consumers who wanted something special could select pitchers, punch bowls or other forms decorated with transfer-printed designs.  Many pottery manufacturers commissioned engravers to make transfer-prints for their wares that would be attractive particularly to Americans.  These designs related to current events or national heroes—George Washington was a favorite.  Along with prints that treated issues of the day, manufacturers created designs to appeal to Freemasons.

This pitcher, marked as the product of the Herculaneum Pottery in Liverpool, England, features two of the most common Masonic-themed designs found on transfer-print pitchers of the era. One is a verse of the “Entered Apprentice Song” in a surround ornamented with Masonic symbols (illustrated at left); the other design displays a raft of Masonic symbols flanked by two columns, topped by figures representing the virtues Faith, Hope and Charity (illustrated at right).  The pitcher was also personalized with the name of its owner— “Charles Copland” and his profession— “Housewright”—painted in gilding under the spout (illustrated below).

Family history relates that this pitcher belonged to Charles Copeland, who lived from 1782 to 1809.  City directories and other records show that a man 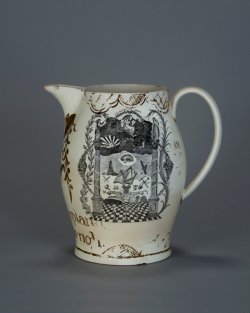 named Charles Copeland made his home on Orange Street in Boston and worked as a housewright, or builder, in the early 1800s.  Records at the Grand Lodge of Massachusetts note that Charles Copeland, most likely the owner of this pitcher, took the Entered Apprentice, Fellow Craft and Master Mason degrees in St. Andrew’s Lodge of Boston in 1807.  Copeland, or a well-wisher, may have ordered this pitcher to commemorate his becoming a Freemason.  With its Masonic-themed designs, along with Copeland’s name and occupation, this pitcher represented several elements of its owner’s identity.  Copeland died young, at just 27 years old, leaving his wife Sally with three small children.  For his family, who preserved this vessel for several generations, this pitcher may have also served as a memorial to its first owner. 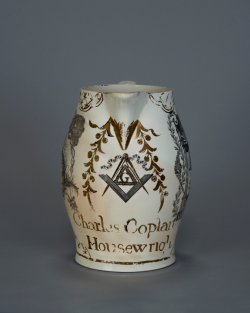