New to the Collection: Butterfly Wing Picture Made for Harry Lindquist 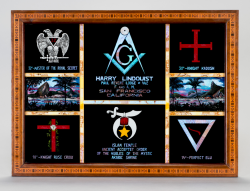 One of our most commented on blog posts in past years discussed a tray decorated with Masonic symbols formed out of butterfly wings.  We are excited to have just added another butterfly wing picture that displays several Masonic symbols to the Scottish Rite Masonic Museum & Library collection.

Colorful souvenirs decorated with iridescent butterfly wings and reverse painting on glass—often sold in Brazil or Buenos Aires—enjoyed popularity from the 1920s through the 1950s.  Craftsmen assembled this custom-made butterfly wing picture for traveler Karl Harry Lindquist (1909-1985), probably in 1948.  The sixteen by twenty-two inch framed picture combines information about Lindquist’s Masonic affiliations with two pictures of stylized Brazilian scenes.  The craftsmen who put this work together used blue, pink and yellow butterfly wings to give color to lettering, some symbols and the borders between the different elements.

Lindquist, as noted on the picture, belonged to Paul Revere Lodge #462 in San Francisco, as well as the Islam Shrine, located in the same city. Membership records at the Grand Lodge of California document that Karl Harry Lindquist joined Paul Revere Lodge in 1944.  Lindquist received degrees in the Scottish Rite in San Francisco in 1945.  Symbols of different bodies in the Scottish Rite are portrayed on the picture in butterfly wings and in black, yellow, white, red and green paint.

Born in Sweden, Karl Harry Lindquist immigrated to the United States as a young man in 1929.  Early in his career he worked as a seaman, ship’s cook and steward.  Over time he lived in New York, San Francisco and New Jersey.  He became an American citizen and eventually married.  Intriguingly, as logged on passenger lists and in immigration records, in 1948 Lindquist traveled to Rio de Janerio two times.  He went in July, working as a merchant, and again in September, working as a representative.  The picture’s maker marked it on the back: Aliwu, Rio.  Lindquist likely commissioned this picture celebrating his involvement in Freemasonry on one of his 1948 journeys.

Many thanks to Jason Harding, Grand Lodge of California, and Larissa Watkins, Scottish Rite of Freemasonry, SJ, USA.