Research into a new acquisition to the collection of the Scottish Rite Masonic Museum & Library, an 1830 letter written by a Freemason to the Past Master of his lodge, reveals a much more complex and interesting story of the Anti-Masonic movement in America. The movement began well before the death of William Morgan in 1826, and may be divided into two distinct periods: the moral opposition to Freemasonry, which began around 1790, and the political opposition to Freemasonry, which began after the election of President Andrew Jackson in 1828.

This basic timeline for the birth and evolution of Anti-Masonry was typified in the state of Vermont, the home state of both the author and recipient of the Archives’ 1830 letter. Moral opposition to Freemasonry arose as early as 1798 by members of the Baptist Church, and it continued in this form in the state of Vermont until 1829, when President Jackson’s use of the spoils system to remove Democratic office holders prompted the Anti-Masons to form a political party. This letter from the collection provides one Mason’s response to the growth and threat of Anti-Masonry as a political movement. It represents the opinion of a political insider and provides us with a fascinating insight into American politics.

The letter, written by Justus Burdick (1793-1849) of Burlington, Vermont, to Vermont Secretary of State Norman Williams (1791-1868) of Woodstock, Vermont, is reproduced below, along with a transcription. 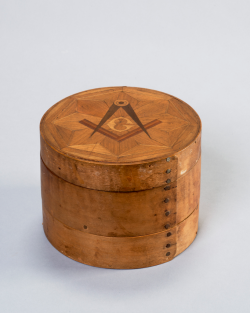 Recently the Scottish Rite Masonic Museum & Library purchased a wooden box decorated with inlay for the collection (illustrated at the left).  This three-part round box was designed for a particular purpose—storing collars and collar studs.

Householders favored round and oval boxes made of wood for storing kitchen and pantry items throughout the 1800s.  Makers designed boxes in different sizes for all kinds of supplies including meal, sugar, cheese, butter and herbs. This box probably dates from the late 1800s.  Its manufacturer employed the same materials and techniques utilized in making round household boxes in earlier decades.  These boxes typically had sturdy wooden tops and bottoms with sides constructed out of thin pieces of strong, pliable wood shaped on a mold.  Box tops sometimes bore labels or were decorated with paint or carving.

In the mid-1800s, a new style of men’s shirt began to take hold—shirts worn with detachable white collars.  This innovation allowed men to wear a fresh, starched collar without the expense or labor of someone laundering an entire shirt.  By the 1890s specialized manufacturers produced millions of linen and cotton collars, as well as celluloid and disposable paper collars for men.  Manufacturers often sold collars in decorated cardboard boxes advertising their brand.

This small round box (just over 5 inches high and 7 inches in diameter) was designed to store collars.  Two interlocking trays allowed the owner to separate different kinds of collars.  A small drawer cleverly fit into the side of 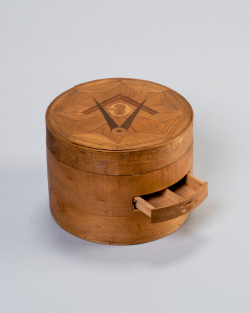 the box (illustrated at the right) provided a convenient place for keeping track of the small collar studs which secured collars to shirts.   An inlay design on the top of the box featured a square and compasses with the letter G—a symbol of Freemasonry—which suggests that this box once belonged to a well-dressed Mason. 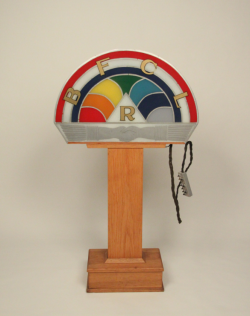 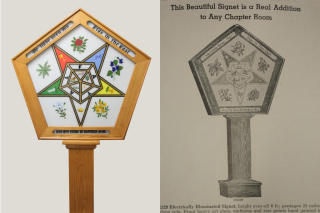