"Down in a Shell Crater We Fought:" World War I Stereoviews
150th Anniversary of the Union of 1867

"William Maxwell": One of the Most Dangerous Frauds at Large 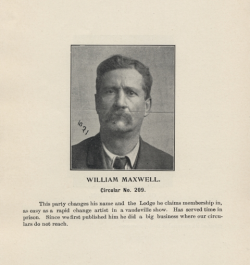 Portrait of "William Maxwell" from Album of Masonic Impostors, 1903.

Each year in May, we return to the topic of Masonic impostors, which we covered in our first blog post back in 2008.

This year we present a man called William Maxwell, who was featured in the 1903 booklet, Album of Masonic Impostors. He was previously published in the Masonic Relief Association's Official Warning Circular No. 209. The Album colorfully describes him as having changed "his name and the Lodge he claims membership in, as easy as a rapid change artist in a vaudeville show." The description also suggests that Maxwell knew what cities and towns to avoid, stating, "Since we first published him he did a big business where our circulars do not reach." 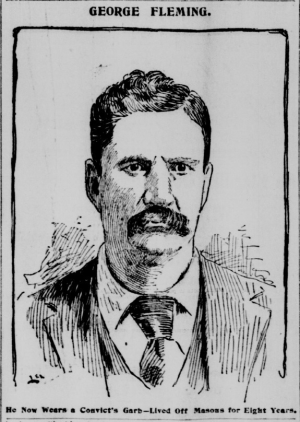 Portrait of George Fleming from January 23, 1898 edition of The Seattle Post-Intelligencer.

In January 1898, Maxwell - whose real name appears to have been George Fleming - was arrested in Seattle, Washington, and convicted of obtaining money under false pretenses. He was sentenced to two and a half years in prison. The January 23, 1898 edition of The Seattle Post-Intelligencer carried a front-page article about Fleming titled "Bled Masons for Eight Years: George Fleming Confesses to a Long Career of Crime." In the continuation of the article, on page 7, an illustration of Fleming makes it clear that the "William Maxwell" pictured above and the George Fleming convicted in Seattle are the same person. Fleming claimed a number of different aliases and boasted of having made of career out of defrauding Masons and taking their money. By way of showing how successful he was at posing as a Mason, Fleming claimed to have duped Albert Edward, Prince of Wales, who was then the Grand Master of the United Grand Lodge of England out of $150 while dining with him in Paris.

Although the article mentions various aliases used by Fleming during his eight years of swindling, one name, "William Maxwell," is conspicuously absent. It seems likely that this was a new alias that Fleming began using after having been released from prison. If Fleming served the entirety of his two-and-a-half-year term, he would have been released in the summer of 1900. Existing evidence suggests that it did not take him long to resume his career as a Masonic impostor.

For example, the 1903 Proceedings of the Grand Lodge of Nebraska mention Maxwell and their encounter with him, calling him "one of the most dangerous frauds at large." A brief entry in the Omaha Daily Bee for January 28, 1903 reads, "William Maxwell, the alleged Masonic fraud, has left for parts unknown." It is unclear where Fleming/Maxwell went after leaving Omaha or when he died.

If you want to read more about Masonic impostors, be sure to check out all of our previous posts on the subject.