The Lexington Alarm letter - on view and online
"Down in a Shell Crater We Fought:" World War I Stereoviews

Marching with the Odd Fellows 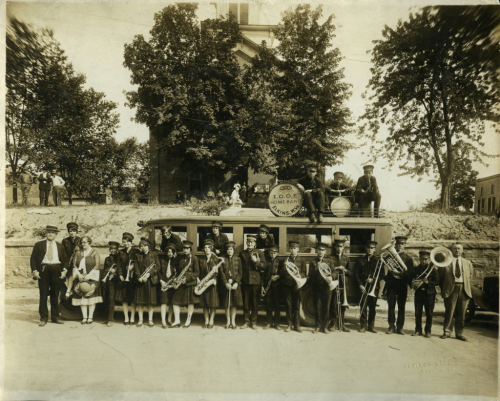 “The home boys and girls always present a pleasing appearance and they were at their best today.”

Mention a “marching band,” and many of us immediately think of large groups of high school, college, or military musicians, performing in perfect synchronization for a parade or a football game. Maybe you remember watching Robert Preston as Harold Hill leading seventy-six trombones in The Music Man (1962) or seeing members of The Ohio State University Marching Band form a moonwalking Michael Jackson on YouTube. But marching bands have not always been merely the purview of high schools, militaries, and universities.

The Odd Fellows Home in Elkins was no small establishment. Dedicated in 1910, the stately brick facility housed some 210 “brothers, sisters, and orphans” and included a 225-acre farm. A 1927 Album of Odd Fellows Homes listed the value of the Elkins Home buildings and grounds at $300,000, or roughly $8.57 million in 2015 dollars.

Likewise, we can see a great deal of pride from among the group in this picture. Note that they elected to be photographed along with their bus, suggesting they traveled in the region. Though the band hailed from Elkins, the studio stamp in the bottom right corner of the photograph is from Newlon Studio in Spencer, West Virginia, about 100 miles to the west. Either they, or their photographer, traveled to make this photo. We see, also, that the band members have taken a great deal of care in their appearance. Note the pressed, matching uniforms, the well-shined bell of the sousaphone at the far right, and several girls set their hats at jaunty angles. Finally, there’s always a lot to learn from what happens in the background of a photograph. Along the ridge behind the street, we see that over a dozen men, women, and children turned out to witness this picture being taken—perhaps a testament to the notoriety of the event.

But this leaves aside a central question: why a band for the Odd Fellows Home? First, as with many fraternal organizations, the Odd Fellows themselves had a rich tradition of songs and ceremonial music. The Odd Fellows Pocket Companion and Minstrel from 1873, a manual of organization lore, ritual, and songs, included 144 pages of “odes” for occasions ranging from the opening of meetings to member funerals. However, it’s more likely that the function of this particular band would have been more for community entertainment than for ceremony. This Odd Fellows Home Band would have been one among many thousands of bands representing organizations, schools, and municipalities around the world in the early 20th century. Military and militia (i.e. civilian “military-style”) bands had been an important source of music and entertainment since the 1800s. As music historian Raoul F. Camus wrote, by one estimate there were 10,000 such groups in the United States by 1889. He continued:

Professional and amateur bands appeared at military and civilian ceremonies and parades, concerts, amusement parks, seaside resorts, county and state fairs, and national and international expositions. Their repertory ranged from the ever popular marches, songs, waltzes and novelties to the classical standards of the day. Many North Americans had their first, and usually only, exposure to the music of Mozart, Beethoven, Rossini, Verdi, Liszt and Wagner through these bands. Opera selections and variations were performed by leading soloists, and even grand operas were staged.

Following John Philip Sousa’s establishment of his own band in 1892, professional bands further expanded in popularity. By the time this photograph of the Odd Fellows Home Band was taken around 1930, Sousa had led his band on four tours of Europe and a world tour. In addition to the numerous professional bands that sprang up in Sousa’s wake, an even wider array of amateur bands arose, including bands for service organizations (including the Salvation Army), cities, and even companies and factories. So an Odd Fellows Home Band would not have been at all unusual in that respect, and indeed, several other Odd Fellows homes and chapters established bands of their own.

The Odd Fellows Home Band in Elkins likely served a deeper purpose for the organization. In his 2010 history of The Oddfellows, Daniel Weinbren wrote that a central concern of the Odd Fellows’ ceremony, practice, and belief structure was the establishment of respectability; in other words, the Odd Fellows organization wished to show that it was respectable and honorable. One way of doing so was though caring for the less fortunate. These philanthropic activities led to the establishment of the charitable home in Elkins. But another way to demonstrate respectability was through public ceremony, such as parades. In England (the Odd Fellows branch of Weinbren’s focus), brothers marched in parades dressed in their regalia and carried intricately decorated banners in order to promote their work and boost membership. Public ceremonies like parades “helped to remind members and potential members of the importance of ordered, organised mutuality.” By putting on attractive displays for spectators, Odd Fellows sought in part to express the high moral aims of their organization. And it seems that the Odd Fellows Home Band in Elkins had a similar effect.

On October 30, 1930, Elkins, West Virginia held its first Mountain State Forest Festival. The Elkins Inter-Mountain reported “brilliant sunshine” and a number of “distinguished visitors” in attendance, including the Governor, a congressman, and the chairman of the State Road Commission. Of special note were the bands and military cadets: The West Virginia University cadet band attended the festival, as did cadets from the Greenbrier Military Academy. And, at 11 o’clock, “the Odd Fellows home band made its appearance on the streets…and added to the color of the occasion. The home boys and girls always present a pleasing appearance and they were at their best today.”

Visit our HistoryPin page to see this photograph and other collection items mapped!