America's Race to the Moon Inspires a Freemason (and a Boy) to Dream
40th Anniversary: Masonic Symbols in Decorative Arts 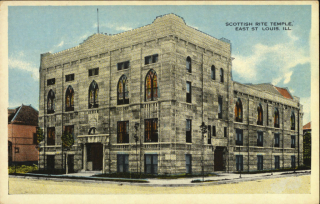 In a post from the New York Public Library's blog last year called "Using Postcards for Local History Research," librarian Carmen Nigro laid out in wonderful detail the many ways in which postcards might be used for research. While they may not seem to some as exciting as, say, an 18th-century manuscript, they do, in their own way, preserve a visual record of the past. 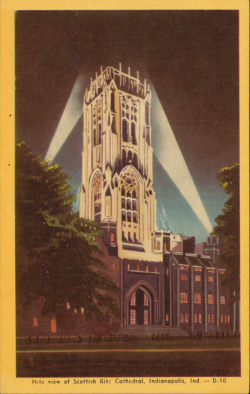 Sometimes neighborhoods change so much, it's hard to imagine what was there before. East St. Louis is a difficult reminder of this. The Scottish Rite temple pictured on the postcard pictured above once stood on the corner College Ave. and 14th St. in East St. Louis, Illinois. The cornerstone was laid on August 6, 1910 and the building opened a year later. The site was chosen because it was "conveniently located near a streetcar line in the section of the city of East St. Louis most convenient for the members." Sadly, the building was destroyed by a fire in 2005. To look at the intersection today, it is difficult to imagine that the building pictured on the postcard once stood here, with streetcars passing by.

On a more uplifting note, buildings such as the Indianapolis Scottish Rite cathedral - pictured in a 1929 postcard at right - are still in vibrant use today.