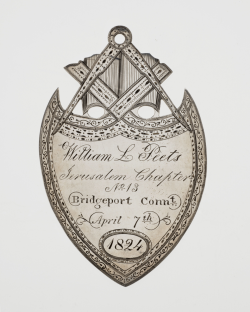 Readers who subscribe to the Scottish Rite Masonic Museum & Library know we can’t get enough of the intriguing engraved medals created for Freemasons in the early 1800s, especially those associated with the mark degree. We’ve posted about mark medals in the past.  Today we want to introduce a recent acquisition—a mark medal that can, unusually, be attributed to a designer or engraver who put his name on similarly decorated examples.

In October of 1824 William Leavenworth Peet (or Peets, as noted on the medal) affiliated with the Masonic lodge St. John’s No. 3 in Bridgeport, Connecticut.  In April of the same year he had joined Jerusalem Chapter No. 13, also in Bridgeport.  To commemorate his taking the mark degree at Jerusalem Chapter, Peet (1788-1866) commissioned a silver shield-shaped medal inscribed with his name, his chapter, its location and the date (illustrated at left).  On the other side of his medal Peet had engraved an emblem that he selected for himself as part of the mark degree--a letter “W” (illustrated below at right).  The letter may have referred to his first name or symbolized Wisdom, one of the supports of the lodge, often represented by the letter W or by an Ionic column.

The craftsman who decorated Peet’s medal did so with flair.  He added vine-like lines to the edges of the metal and cut out tiny pieces of the medal in different patterns to give the medal a richly textured border.    A very similar style of engraving decorates a medal made for Lockwood N. DeForest in 1826, now at the Metropolitan Museum of Art, and a medal crafted for Silas Wooster Sherman in 1826, owned by the George Washington Masonic National Memorial.  DeForest, like Peet, belonged to St. John’s No. 3 and Jerusalem Chapter.  Sherman was a member of Hiram Chapter No. 1 in Newtown, Connecticut.  An engraver or designer, C. Foote, signed these medals at the bottom of the circle that enclosed the owners’ personal emblems.  These medals, and two others in private collections that are signed by Foote, all belonged to Royal Arch Masons that lived in Connecticut.

The signer was likely Charles Foote (1793-1862), a member of St. John’s No. 3 and of Jerusalem Chapter.  Intriguingly, Foote worked as a bank cashier, not as far as we know, as an engraver, artist or silversmith.  Records have not shed light on Foote’s interest or skill in engraving.  Hopefully further research will  uncover more information about Foote.  Alternately, Foote may have designed rather than engraved the medals or the Charles Foote who belonged to the same lodge and chapter as William L. Peet may not have been the C. Foote who signed the medals.   If you have any ideas about C. Foote and the medals he signed, be sure to leave us a comment below. 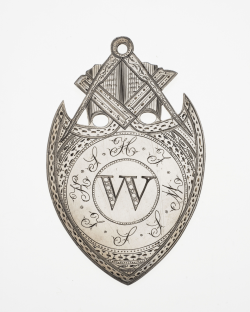