Silhouettes, also known as shades or profiles, were a popular and ubiquitous style of portraiture from the mid-1700s through the  1800s. They were less expensive than a painted portrait but declined in popularity with the invention of photography.  The word silhouette was derived from the name of French Minister of Finance Etienne de Silhouette (1709-1767) in the late 1700s. Silhouette cut shadow portraits as a hobby and was well known for his unpopular austere economic restrictions in France under king Louis XV (1710-1774). The term a-la silhouette  became synonymous with cheap. Profilist August Edouart (1789-1861) is thought to have popularized the word silhouette when he began using it to describe his profile portraits.

There are four basic 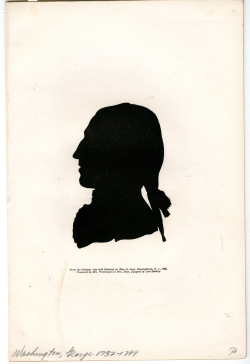 techniques in the production of silhouettes: Hollow-cut, cut and paste, painted, and printed (engraved or etched). Hollow-cut ones are created by cutting the profile from the center of a piece of paper or other material and mounting it against a background of contrasting color, allowing the silhouette to show through the cut-out space. Cut and paste silhouettes are created by cutting out a profile and pasting it to a contrasting background.

The print includes this caption, “From the Original (cut with scissors) by Miss De Hart, Elizabethtown, N. J. 1783, Presented by Mrs. Washington to Mrs. Duer, daughter of Lord Stirling.” Catherine Alexander Duer (1755-1826) was a member of the prominent Livingston family from the Hudson Valley in New York. Her uncle Phillip Livingston (1716-1778), a New York delegate to the Continental Congress, signed the Declaration of Independence. Her family was well acquainted with the Washingtons and George Washington gave her away at her 1779 wedding to Colonel William Duer (1747-1799). 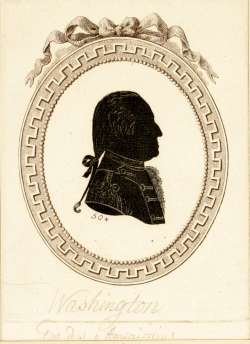 The silhouette on the right is an engraved print from Johann Friedrich Anthing’s (1753-1805), Collection de cent silhouettes des personnes illustres et célèbres dessinées d'après les originaux [Collection of 100 silhouettes], originally published in 1791.  Dr. William L. Guyton (1915-2011) and Mary B. Guyton donated these silhouettes as part of a larger donation of George Washington engravings and prints. Guyton, a retired surgeon and World War II combat veteran, was a well-known collector of silhouettes and George Washington prints and books. He donated most of his silhouette collection to the Abby Aldrich Rockefeller Folk Art Museum at Colonial Williamsburg. To see the newly digitized George Washington engravings, visit our online collection: http://www.srmml.org/collections/online-collections/

Stay tuned for more additions to the online collection in the coming months!