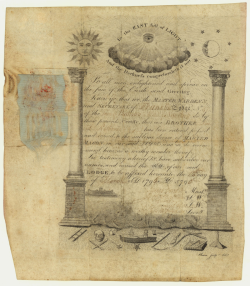 Around 1790 Daniel Rathbone (1759-1808) moved about 70 miles from Berkshire County, Massachusetts, to Saratoga County, New York.  Recently married to Anna Reddington (1764-1855), he relocated to the area to start a saw mill and a family in an area called Rock City, a community that later became part of Milton, New York.  A county history published in the late 1800s claimed Rathbone was Rock City’s first settler.  Over the next ten years he and his wife had eleven children. As part of establishing his life in a new town, Rathbone joined the first Masonic lodge in the area—Franklin Lodge No. 37 in nearby Ballston, New York.  His Master Mason certificate (pictured at left), issued in 1796, survives.  Engraved by Albany, New York, craftsman Isaac Hutton (1766-1855), it features images of Masonic symbols and a promise, attested by the officers of the lodge, that they “recommend him [Rathbone] as a worthy member.”

Area Freemasons solicited Franklin Lodge No. 37’s warrant from the Grand Lodge of New York in 1794.  A few years later, in 1803, Freemasons in Ballston requested and received a warrant from the Grand Chapter of New York for a Mark Master’s Lodge.  Franklin Mark Lodge No. 21 may have met in the same place as Franklin Lodge No. 37.  Daniel Rathbone was likely a member of this group.  A silver mark medal engraved with his name (pictured at right, below) and mark (pictured at left, below) forms part of the collection here at the Scottish Rite Masonic Museum & Library.  As part of taking the mark degree, a Freemason chose an emblem to represent himself; often a symbol related to his profession or a representation of a value he held dear.  For his mark, Rathbone selected a bird surrounded by a snake eating its own tail (a traditional symbol of infinity or ouroboros).  What the symbols engraved on the mark medal meant to Rathbone is not obvious.  On the other side of the medal the engraver inscribed “Daniel Rothbon” (a variation on the spelling of Daniel’s last name) and “Mk Ms Lodge Ballston” (an abbreviation for Mark Master’s Lodge). 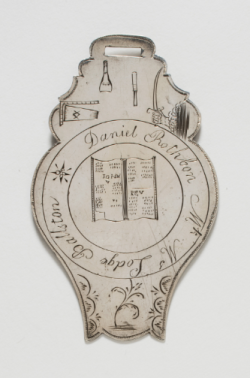 New York, around 1804, near three of his sons.  Given the fact that both men lived near Ballston around the time residents founded the Mark Master’s Lodge No. 21, it is possible that the medal belonged to Daniel’s father. Daniel Rathbone Jr.’s certificate proves his interest and involvement in Freemasonry during the time that local brethren established the Ballston mark lodge.  It seems most likely that the medal was his property.  If the medal belonged to the younger Daniel Rathbone, he did not own it for long.  He died unexpectedly.  As noted on his gravestone, his “death was occasioned by an accident at his saw mill on the 13th day of December 1808 aged 49 years 9 months and 11 days." 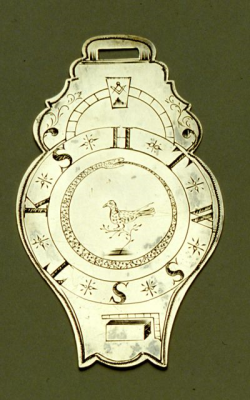