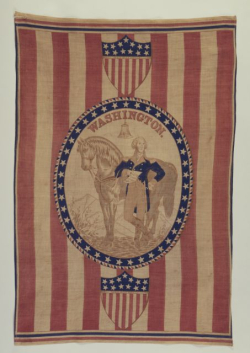 The Scottish Rite Masonic Museum & Library has many images of George Washington (1732-1799) in its collection (stay tuned for more on that over the coming months!).  This banner features an image of the first president standing next to his horse.  So far, the source for this image of Washington is unknown.  The portrait may be original to the banner.

The banner was probably produced as a souvenir in 1876, when the United States was celebrating its centennial.  Textiles like this one, along with many other items, were available for sale around the country and especially at the Centennial Exposition held that year in Philadelphia.  The red, white and blue color scheme was popular, along with the star, stripe and shield motifs, which were clearly understood as American symbols.  The shields are expressly identified on the banner as "Shield of U.S. America."

Washington is reading a letter inscribed "Victory is Ours, Paul Jones."  This seems to be a reference to Revolutionary naval hero John Paul Jones (1747-1792).  Jones's best-known battle occurred in September 1779 while he served as captain of the Bonhomme Richard.  Jones engaged the Serapis, a British warship.  Outgunned from the beginning, Jones's ship suffered an onboard accident early in the battle when two of its guns exploded.  To compensate, Jones brought his ship close to the Serapis and secured the two ships using grapples and lines.  When the British captain asked Jones if he surrendered, Jones is famously said to have answered "I have not yet begun to fight."  Indeed, Jones led his crew to victory by repelling a British boarding party and causing significant damage to the Serapis.

George Washington is well known as a Freemason; he joined Virginia's Fredericksburg Lodge No. 4 in 1753.  John Paul Jones was also a Freemason.  He joined Saint Bernard Lodge No. 122 in Scotland in 1770, later becoming a member of the Lodge of Nine Sisters in Paris.

Do you have a centennial souvenir in your collection?  Have you ever seen a similar portrait of George Washington?  Let us know in a comment!