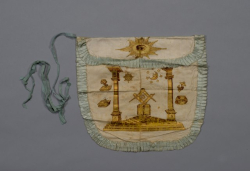 Several generations of the Hill family, all members of Liberty Lodge in Beverly, Massachusetts, passed down this apron and two others painted with a strikingly similar design. A descendant from the family recently donated all three aprons to the Scottish Rite Masonic Museum & Library.  The apron shows a common arrangement of symbols: three steps up to a mosaic pavement (symbolizing the good and evil in life), with two columns and a square and compasses (signifying reason and faith) with a “G” (an emblem for God or geometry or both) above an open Bible in the center. Other symbols are painted on each side, and an all-seeing eye decorates the flap.

While this particular apron does not have a label on the back, one of the other very similar-looking aprons in the gift does.  The almost identical appearance and the aprons' history suggest that the same maker who labeled one apron made all three: Lakeman and Hooper in Salem, Massachusetts. Nathan Lakeman (1804-1835) and Stephen Hooper started advertising their partnership in the local Salem newspapers in early 1824. An ad in the Essex Register in February 1824 explained that the men “have taken rooms in the building on the corner of Essex and Washington streets, where they will execute Masonic, Portrait, Sign, Fancy and Glass Tablet Painting with neatness and despatch.”

Later newspaper advertisements featured their Masonic work more prominently. Lakeman joined Jordan Lodge in Danvers in 1827, serving as Secretary from 1828 to 1832.  One ad, which appeared in 1824, began with the bold heading “MASONIC” and then specified, “Knights Templars, Royal Arch, and Master Mason’s Aprons and Sashes, For sale by Lakeman & Hooper.”  However, by June 1825, the two men seem to have gone their separate ways, judging by an advertisement in the Essex Register offering “Masonic Aprons of the newest and most elegant patterns, constantly for sale by N. Lakeman … Floorings, Royal arch Dresses, &c. furnished at short notice.”  Lakeman continued advertising alone throughout the 1820s.  A fourth apron in the Museum & Library collection (see photo at right; it is not part of the recent gift) also has a label for Lakeman & Hooper on the back, but “Hooper” is crossed out, suggesting that it was made (or sold) after the men dissolved their partnership. 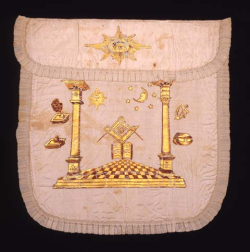 In 1831, Lakeman married and took a job as cashier of the Danvers Bank. He seems to have stopped advertising as a painter, but it is unknown whether he continued to paint on the side.  Sadly, Nathan Lakeman died of consumption in 1835 when he was only thirty-one years old.   His obituary noted that “a wide circle of acquaintance lament his death—the aching hearts of more intimate friends are the melancholy testimonies of his worth.”

This selection of four aprons by the same maker in the Museum & Library collection offers a unique opportunity to study the choices made by the artist and the customer. While the design is essentially the same on each apron, they show small differences that could suggest the personal preferences of the customer or the growing skill of the artist.  For more on Masonic aprons, check out our book, The Badge of a Freemason: Masonic Aprons from the Scottish Rite Masonic Museum & Library, which can be ordered here.  The apron at top left is currently [July 2016] on view at the Museum & Library as part of our exhibition of Recent Acquisitions.  For more about our exhibitions, location and hours, visit our website, http://www.srmml.org/.