"In McKinley We Trust, In Bryan We Bust": Presidential Campaign Memorabilia from the Collection

It's election season! As political parties 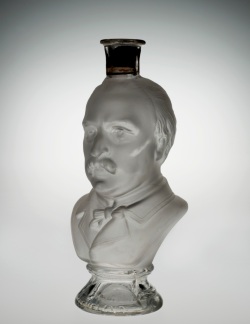 prepare for their respective conventions, we decided to spotlight a couple of the wonderful presidential campaign items in the Scottish Rite Masonic Museum & Library collection.

Glassware, pins, canes, flags, and bobble heads are just some of the types of campaign materials made and sold over the past one-hundred and fifty years. Campaign memorabilia and ephemera present a graphic record of past political climates, personalities, societal concerns, and political slogans. Although the way in which candidates campaign has changed, the goal of rallying support and winning the highest seat in American politics is the same.  The memorabilia, some whimsical, some tongue-in-cheek, echoes some of the same concerns steeped in present day politics.

Grover Cleveland (1837-1908), who served as the 22nd and 24th President of the United States, is the only president to date who served two nonconsecutive terms. This 1884 whiskey bottle in the form of presidential candidate Grover Cleveland’s bust was one of the many political souvenirs from his 1884 bid for the white house against Republican James G. Blaine. The bottle was a souvenir from a political dinner in California during the campaign. 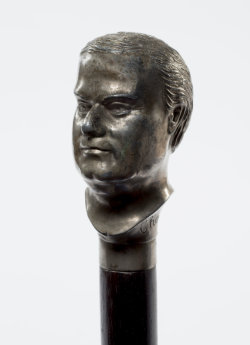 referred to as walking sticks, were once popular campaign items and often used during political torchlight parades. In 1977, Henry S. Kuhn (1895-1984) donated a William McKinley political campaign cane to the Museum & Library. Family history relates that Samuel Kuhn (1866-1920), Henry’s father, received this cane during the aforementioned presidential stop in Cleveland, one day before McKinley’s assassination in Buffalo. The words “preferred choice” are inscribed on the cane. This phrase was one of the slogans for the 1899 McKinley/Roosevelt campaign. The cane was one of the many McKinley artifacts and campaign materials sold to supporters and visitors.