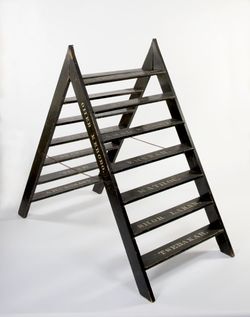 Do you recognize this ladder? It’s a prop that Scottish Rite Freemasons used during the early 1900s when conferring the 30th degree. Known as the “mysterious ladder,” the words on one side’s rungs call out the seven liberal arts and sciences: grammar, rhetoric, logic, arithmetic, geometry, music, and astronomy. The rungs on the other side, marked with transliterations of Hebrew, reminded initiates of virtues such as understanding, faith, purity and charity. Writing on the sides of the ladder represents love of God and love of your neighbor. These messages, along with the upward-pointing shape of the ladder reminded the candidate of how he could learn and grow as a Mason.

While this particular ladder dates to the early 1900s, the history of its use in the Scottish Rite degrees goes back to the mid-1700s, when it appeared in the 24th degree. Scholar Alain Bernheim has found evidence that this degree, complete with an illustration of the ladder, originated in France in 1750. The Francken Manuscript in the collection of the Scottish Rite Masonic Museum & Library, which dates to 1783, also includes an illustration of the ladder with the text of the 24th degree, then titled “Grand Elected Knight of Kadosh or Knight of the White and Black Eagle” (you can read more about Henry Andrew Francken, the compiler of the manuscript, here). As the degrees were rewritten and reorganized into the present-day system, the ladder remained in what became the 30th degree.

Ritual books from 1875, 1904 and 1939 include an explanation of the ladder and required the candidates to mount the steps and climb over it before receiving the degree. The 1904 and 1939 books show a scale drawing of the ladder and indicate its placement in a plan of the room or stage. The ritual explained that “it is the only way of entrance to the Order, and we sincerely trust that the lessons taught on its several steps will make a deep and lasting impression on your mind.” Regalia catalogs in the Scottish Rite Masonic Museum & Library collection from the early 1900s (see illustration on right) offer the ladder “of wood, well made and finished, the proper lettering in both English and Hebrew.” Today, the ladder is no longer used in the 30th degree, but it helps to demonstrate the change from intimate degree ceremonies conferred in the lodge room to elaborate staged degrees during the early 1900s.