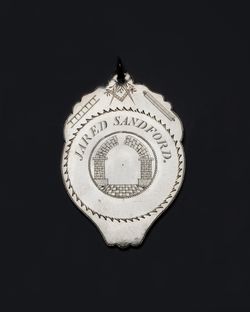 From time to time, we have the chance to post about interesting new additions to the collection at the Scottish Rite Masonic Museum & Library—today a silver mark medal from the early 1800s.

Previous posts have discussed mark medals, an intriguing form of Masonic material culture.  When taking the mark degree, a new Mark Master Mason selected a symbol that was personally meaningful to be recorded as his unique mark next to his name in the lodge records.  Some men chose an emblem that represented a value important to Freemasonry, such as charity or equality.  Other men recorded symbols with personal meanings, like the initials of their name or attributes representing their profession.  Some Mark Master Masons commissioned engraved silver or medal badges decorated with their personal emblems.  A few lodges, like Holland Mark Lodge in New York City, required that members have these badges made.

An engraver decorated one side of this medal with the owner’s name, Jared Sandford and a depiction of an incomplete arch.  At the top of the medal, the engraver detailed the Masonic symbols of a square and compasses with a sprig of acacia, a ladder and a plumb.  On the other side, the engraver outlined an all-seeing eye near the hanging ring and a cherub’s head at the bottom of the medal.  Between these two elements, the craftsman engraved the mnemonic associated with the Mark Master degree in ornate letters in a circle.  Within the circle, the engraver delineated what appears to be a distinctive tool used by doctors in the early 1800s.

Doctors and surgeons used this handheld and hand-powered tool, a small circular saw called a trephine, to cut out small circles of bone, often from the skull.  Removing a portion of skull bone could help speed the healing of a head injury by relieving pressure on the brain.  The engraver who portrayed this trephine included distinctive details such as the small spike at the center of the circular blade that helped hold the saw in place.  He also showed the small lever on the side of the tool that controlled the height of the spike.  This control helped keep the spike from injuring the brain as the surgeon cut away bone with the saw. 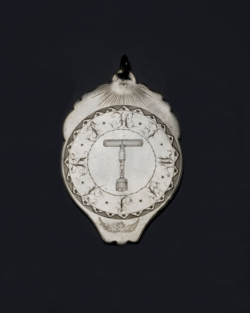 A trephine is an unusual tool to be selected as a mark.  Because a trephine is a medical device, it was likely a meaningful object to a Mark Master Mason who had a special understanding its use—a surgeon or doctor. A man named Jared Sandford, who was born in Southampton, New York in 1774 and died in 1817, and was a doctor in the town of Ovid, Seneca County, New York, appears to be a likely candidate to have owned this medal.  Further research will, hopefully, uncover information about Jared Sandford’s Masonic membership.

If you have ideas or suggestions about how to learn more about this medal, be sure to leave them in the comment section below.