"The Badge of a Freemason: Masonic Aprons from the Collection" opens March 19, 2016
Model Train Weekend presented by the Northeast Ntrak Modular Railroad Club 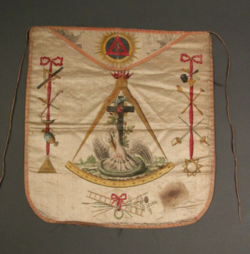 Recently, we were able to add this Masonic apron to our collection.  It shows symbols associated with the Rose Croix degree of the Scottish Rite, which is the fraternity that founded and supports the Scottish Rite Masonic Museum & Library.  Many people, Freemasons and non-Masons alike, assume that the fraternity’s name, “Scottish Rite,” honors the roots of the group and that it originated in Scotland.  Some historical sources have fostered this story by suggesting that Scottish supporters of the Stuarts of England invented the Scottish Rite degrees in the 1600s to advance their political cause.  The Scottish Rite was actually established in France in the 1700s, followed trade routes to the West Indies and was then imported to North America.

Once a man becomes a Master Mason, he may choose to join additional Masonic groups, such as the Scottish Rite.  Today, members perform a series of twenty-nine degrees (4th-32nd) as morality plays.  Freemasons often call the Scottish Rite “the University of Freemasonry,” as the degrees are designed to supplement and amplify the philosophical lessons of the first three degrees by exploring the philosophy, history and ethics that guide members.  A 33rd degree is conferred as an honorary degree on selected members.

The Rose Croix degree, for which this apron was used, is the 18th degree in the Scottish Rite’s Northern Masonic Jurisdiction.  It tells the biblical story of the building of the Temple of Zerubbabel on the site of Solomon’s Temple, which had been destroyed.  The apron shows the symbols used in the ritual: the pelican piercing her breast to feed her children with her blood; a cross with a rose; and several symbolic tools along the side.  As the symbols on the apron suggest – note the implements of the crucifixion at bottom center – the ritual explores the idea of resurrection and alludes to the story of Jesus Christ.

The design of this apron is probably French, although it can be hard to tell if an apron was actually made in France, or was influenced by French style and made in the United States.  The motif of the ribbons along the sides with tools is often seen on French aprons.  For more examples of Rose Croix aprons, see our recent publication, The Badge of a Freemason: Masonic Aprons from the Scottish Rite Masonic Museum & Library, which can be ordered here.