"The Badge of a Freemason: Masonic Aprons from the Collection" opens March 19, 2016 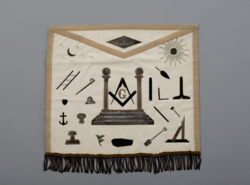 Drawing on a variety of sources—other aprons, book illustrations, engraved certificates and their own imaginations—for inspiration, over the years apron makers have created a wonderful diversity of Masonic aprons. They crafted these aprons from myriad materials including leather, linen, silk and cotton and decorated them with paint, ink, embroidery, bullion, beads and sequins. The Museum is well-suited to undertake an exhibition exploring Masonic aprons; we collect actively in this area and hold over 400 examples.The apron pictured to the left is an unusual example. The Masonic symbols on its surface were cut out of sheet metal, such as silver and brass, and then attached to the leather.  Made in 1896, it belonged to Erwin J. Roberts (b. 1869) of North Adams, Massachusetts, and will be one of the aprons on view in the exhibition.

“The Badge of a Freemason: Masonic Aprons from the Collection” will feature more than 50 Masonic aprons dating from the 1700s through the 1900s as well as related artifacts from the Museum’s rich collection, such as tracing boards, books, regalia catalogs, prints and photographs. Visitors to the exhibition will have the opportunity to learn more about the history, symbolism and workmanship behind Masonic aprons as well as the intriguing stories of the people who made and wore them. We hope you will enjoy the show!

If you would like a preview of some of the aprons featured in the exhibition, you can order your own copy of The Badge of a Freemason: Masonic Aprons from the Scottish Rite Masonic Museum & Library, by Aimee E. Newell, published by the Scottish Rite Masonic Museum & Library.  It is available now for $39.95 plus shipping and tax (if applicable) at  www.scottishritenmj.org/shop.

Posted at 06:30 AM in Decorative Arts, Masonic aprons, Masonic folk art, Posts by Hilary Anderson Stelling, “The Badge of a Freemason: Masonic Aprons from the Collection" | Permalink | Comments (0)

William McKinley (1843-1901), the 25th president of the United States, was born on January 29, 1843, in Niles, Ohio. At the age of 58, shortly after being re-elected to his second presidential term, he was shot in the chest twice at close range while attending the Buffalo Pan-American Exposition. Gangrene set into his wound and he died eight days later on September 14th, 1901, in Buffalo, New York. McKinley is one of four presidents assassinated in our country’s history. The Scottish Rite Masonic Museum & Library owns several interesting artifacts related to the death and memory of William McKinley. McKinley was a Freemason like many presidents before him. He received the first three degrees at Hiram Lodge No. 21 in Winchester, Virginia, in 1865, during his Civil War service. According to a story recounted by General Horatio C. King (1837-1918) at a New York banquet in 1906, McKinley witnessed a friendly exchange between a Union doctor and some wounded Confederate soldiers. When the doctor imparted to McKinley that the soldiers were “Brother Masons,” McKinley is quoted as stating “...if that is Masonry, I will take some of it myself.”  He returned to Ohio and affiliated with Canton Lodge No. 60 and Eagle Lodge No. 431, later renamed William McKinley lodge No. 431. Fellow Mason Horatio C. King's story about McKinley's interest in Freemasonry was allegedly rooted in a conversation he had with McKinley in Washington, D.C., just months before his assassination.

McKinley could be described as a fraternity man due to his active involvement in local fraternal groups including: Sigma Alpha Epsilon, Grand Army of the Republic, Military Order of the Loyal Legion, Knights Templar, Royal Arch Masonry and Knights of Pythias. In a 1959 biography by Margaret Leech (1893-1974) McKinley is described as a "great joiner with a keen sense of group loyalty." McKinley went on to have a storied political career serving as an Ohio state Congressman from 1877 to 1891 and as Ohio's Governor from 1892 to 1896. One hundred and twenty years ago this year, he won his 1896 presidential bid with Garret Hobart (1844-1899) as Vice President.

Before his assassination in 1901, McKinley was invited to a Templar reception hosted by California Commandery No.1, Knights Templar, in San Francisco, California. He accepted the invitation and included a visit to the reception as part of a previously planned national tour with his ailing wife Ida (1847-1907). He made stops in El Paso, Denver and Los Angeles on his way to San Francisco. On May 22nd he addressed a crowd of twelve thousand people including fourteen hundred Knights Templar. He thanked his "Brother Masons" and spoke about brotherhood in the context of  American citizenship and the preservation of liberty. He and his wife returned to the White House on May 30, 1901, and he died three months later.

A national mourning period for McKinley produced many commemorative memorial artifacts like the mourning poster above and these stereocards. The images in these stereocards show the Knights Templar marching in McKinley’s funeral procession in Canton, Ohio, on September 19, 1901, and floral wreaths for his funeral service at the Church of the Savior United Methodist Church. To learn more about another McKinley mourning object, a 1901 commemorative glass platter, see our previous blog post here.

To see political textiles from William McKinley’s  presidential campaign visit the museum to view the exhibition Who Would You Vote For? – Campaign Banners from the Robert A. Frank Collection, which is on view through December 10, 2016.