New to the Collection: A Miniature Chair in a Bottle
Fraternal Mysteries: Knights of Pythias Degree Lodge Team 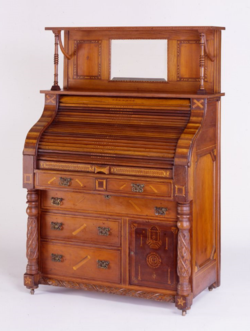 As a furniture form, the desk is for doing business and this example is no exception. Along with large drawers and a lockable cupboard, the craftsman who made this desk fitted its interior with several shelves, pigeon holes and drawers sized for organizing and storing correspondence. He also included two looking glasses on the desk, one on the gallery at the top of the desk and another at the center of the interior.These mirrors may have given the desk’s user a chance to check his appearance, provided him advanced warning of who was approaching him while he worked or--most likely--have helped pick up light in the room.The desk features two drawers that are not obvious to the casual viewer. Behind each of the triangular-shaped decorations flanking the interior mirror, the cabinetmaker concealed two small drawers with rounded bottoms, perfect for storing pens. Giving this type of desk its name is the roll top, wooden slats linked together and mounted to fabric that run through tracks on either side of the desk. These slats form a flexible lid for the desk’s interior. This lid helped keep a study or workplace looking tidy while shielding correspondence from prying eyes. 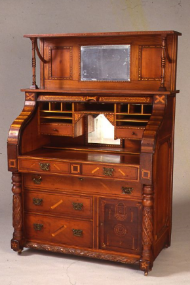 When the Scottish Rite Masonic Museum and Library first purchased this desk, the seller noted that it had been used by a lumberman in Whitehall, New York, a town situated between Lake George and the Vermont border. This intriguing tidbit of information was not documented, but an element of decoration on the desk may either support it or be its source. The desk’s drawers and edges are ornamented with inlay shaped and shaded to resemble cut logs—objects that would have been meaningful to someone who earned his living in lumber.

Much of the inlay on this desk is ornamental—such as the stripes on the columns in the gallery, the different colored wood highlighting each side of the roll top and the jagged lines drawing attention to the front of the desk, but some of the decoration likely held special meaning for the desk’s owner. In addition to his interest in lumber, he was also likely a Freemason.The cupboard door at the bottom of the desk, pictured below, features interesting Masonic imagery. An inlay picture on it depicts a lodge master—identified by his attributes, a top hat and a gavel—standing on a pedestal flanked by the kinds of columns used in Masonic lodges. Another inlay picture at the center of the cupboard door shows lodge furnishings—a Bible on an altar surrounded by three tall candlesticks.Underscoring these pictures, the craftsman placed a small inlay square and compasses with the letter G, one of the most recognized symbols of Freemasonry, at the bottom of the cupboard door. Adding more to the story, the craftsman joined the legs of the compasses with three chain links—a symbol association with another fraternal group, the Odd Fellows. 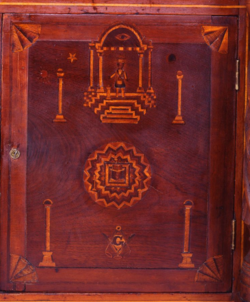 If you have ideas about this desk and its intriguing decoration, please leave us a note in the comments section below.