Lecture: “The Boston Red Cross in the 1918-19 Influenza Pandemic: Vanguard Fighter or Rogue Chapter?”
A Fraternity Goes to War: The History of a Masonic Civil War Certificate 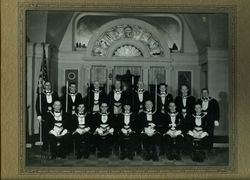 One of my favorite things about being a curator is connecting objects to each other. Recently, the Scottish Rite Masonic Museum & Library received a photograph of the officers of Beaver Lodge in Belmont, Massachusetts, in 1932. Two rows of men are arranged in their Masonic best in the lodge room with the Master’s chair and two columns visible behind them. They wear aprons, collars and jewels. The Deacon and Steward each hold their respective rods. Accompanying the photo in the gift to the Museum & Library were these rods – a wonderful opportunity to connect the objects to the photograph to help visitors and researchers to visualize how the lodge room looked in the early 1930s and the scale of the rituals that these men performed.

Beaver Lodge was chartered in Belmont in 1922. The population of the town had doubled between 1910 and 1920 and would do so again between 1920 and 1930. Members of the existing lodge, Belmont Lodge, numbered more than 500 and the officers realized that the time had come to form a second lodge in town. The name “Beaver Lodge” was chosen due to the location of Beaver Brook and the beaver ponds and dams nearby, as well as the inclusion of the beaver on the official seal of the Grand Lodge of Massachusetts. 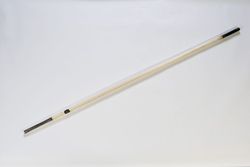 The lodge’s history recounts that “most of the Lodge equipment was donated by various Brethren, and the aprons, jewels, collars and other articles of equipment procured as soon as they could be made.” Presumably, this included the two rods shown here. Both are decorated with silver depictions of the lodge seal and the top of each is engraved “Beaver Lodge.” The Deacon’s rod is also marked “Presented to Thomas Stewart,” suggesting that he served the lodge in this office at some point. Stewart (1885-1968), who was born in Scotland, worked as an electrician and joined Belmont Lodge in 1917. He became a charter member of Beaver Lodge when it formed.

Amos L. Taylor, “History of Beaver Lodge,” Proceedings of the Most Worshipful Grand Lodge of Ancient Free and Accepted Masons of the Commonwealth of Massachusetts for the Year 1947 (Cambridge, Massachusetts: The Cosmos Press, Inc., 1948), 330-341.