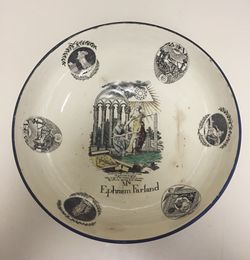 As the Scottish Rite Masonic Museum and Library’s current lobby exhibition, “Called to Refreshment,” makes clear, Freemasons often socialized as part of their meetings.  Masonic lodges invested in pitchers, platters, bowls and other kinds of serving ware for the time when they were “called from labor to refreshment.”  Freemasons – then and now – also socialized outside of the lodge.  Using objects decorated with Masonic symbols on these occasions let everyone know that their owner identified with Freemasonry and valued his association with the group.

This bowl, which was recently acquired by the Museum & Library, is almost thirteen inches in diameter and shows a total of eleven transfer-printed images in the bottom and on the inner and outer sides.  Bowls of this size and shape were generally used to serve punch.  The image inside the bottom of the bowl features two classical figures with a series of five architectural columns.  Several Masonic tools are scattered on the ground.  A verse reads “To heavens high Architect all praise / All gratitude be given / Who design’d the human soul to raise / By secrets sprung from heaven.”  This verse appeared as early as 1769 in A Candid Disquisition of the Principles and Practices…of Free and Accepted Masons by Wellins Calcott. 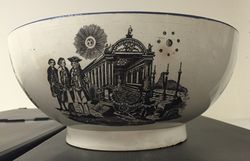 The decorations on the outside alternate between Masonic and non-Masonic.  The Masonic image shows a temple with three figures wearing their aprons and other Masonic symbols.  Another image is American in subject with a liberty cap at the top.  Dating back to ancient Rome, the liberty cap was often used as a symbol of freedom during the American and French Revolutions.  A verse below the cap reads “As he tills the rich glebe the old peasant shall tell, / While his bosom with Liberty glows. / How your Warren expir’d, how Montgomery fell. / And how Washington humbled your foes.”  These lines come from the poem “American Freedom,” written by Edward Rushton (1756-1814) of Liverpool, England. 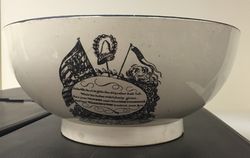 The name of the original owner, Ephraim McFarland, is printed inside the bottom of the bowl.  The Grand Lodge of Massachusetts lists an Ephraim McFarland as a member of Boston’s St. Andrew’s Lodge.  This man was initiated in January 1801 and received the second degree in December 1801, but his membership record does not indicate that he ever received the third degree of Master Mason.  Information given to the Museum & Library with the bowl suggested that the original owner was the Ephraim McFarland who was born in Worcester, Massachusetts, in 1763 and married in 1782.

Further research suggests that the bowl’s owner might actually have been the Ephraim McFarland who lived in Belfast, Maine.  This Ephraim was born in 1765 in Boothbay, Maine, and died in 1849, also in Maine.  This Ephraim was a ship captain who sailed between Maine and Boston.  He both owned and commanded several ships.  His travel to Boston would have provided opportunities to join St. Andrew’s Lodge and to purchase this bowl.

Hi Megan: Thanks for reading our blog and posting. You make an excellent point. The three figures may also hold some symbolic significance since there are several Masonic ideas and concepts that also employ three figures. Thanks again for posting a comment! Aimee Newell, Director of Collections

The three male figures on the side of the punchbowl are George Washington, Joseph Warren, and Richard Montgomery (the heroic generals of the American Revolution mentioned Rushton's poem).