A year ago the Scottish Rite Masonic Museum and Library was lucky enough to receive a gift of a collection of chapter pennies and badges, mostly dating from the early 1900s. Mixed in with the comparatively modern tokens was an engraved silver mark medal that belonged to James Higgins, made in the 1810s or 1820s (below, at left).

As regular blog readers know, these individually commissioned badges can be fascinating.This one sparked our interest because of its intriguing shape and similarity to another in the collection: a gilded and engraved crafted for Henry Brayman, a member of David’s Royal Arch Chapter (at left).

Both of these medals were cut in an interesting lobed form.  One side is engraved with the owner’s name and chapter, the other bears the Royal Arch motto “Holiness to the Lord,” a mitre and eight circles (both below).  Within each circle the engraver illustrated selections of Masonic symbols or scenes that relate to the Mark Master degree. For example, the circle on the upper right contains images of a keystone, chisel and mallet—all symbols of the Mark Master degree.The circle at the lower left encloses three candles, an open Bible, a square and compasses—the lesser and greater lights of the lodge. Comparison of the symbols and scenes engraved within the circles points to a common inspiration for these vignettes, although we don’t yet know what it is. Each medal 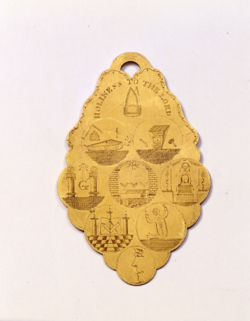 also features an integrated hanging loop, as well as similarly styled script letters in the mnemonic “HTWSSTKS” separated by simple flowers, and a trailing vine embellishing the top edge of the medal by the loop. Together, the similarities between the two medals suggest they may be the work of the same engraver. 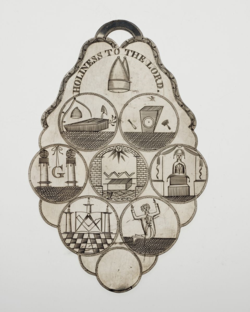 The man who owned the gilded medal, Henry Brayman, belonged to David’s Chapter No. 34 and St. Paul’s Lodge in Auburn, New York. He may have been the Henry Brayman (1791-1853) who lived in Aurelius and later Buffalo, New York. James Higgins owned the silver medal. He is likely the James Higgins (1766-1827) who was born in Connecticut but later lived in Hamilton, New York, where he worked as a cabinetmaker, hotel keeper and tanner. He was  a member of Hamilton Lodge, No. 121, as well as Cyrus Royal Arch Chapter No. 50 of Eaton, New York. Brayman selected a personal mark of a square and awl and had these the symbols engraved on his medal along with his name. James Higgins never had his mark incised on his badge, for reasons we can only speculate about. Hopefully ongoing research will uncover more about these expertly crafted and interestingly decorated medals. If you have any insights to share, please let us know in a comment.