Now on View: The Red, White and Blue
Masonic Tintypes

New to the Collection: A Masonic Apron by William Laughton 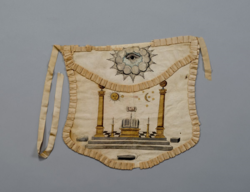 As regular readers of our blog will know, the Scottish Rite Masonic Museum & Library has one of the best collections of Masonic aprons in the world.  We are always looking to add new examples with designs or makers that we are not familiar with.  This apron, a recent purchase at auction, has both a design AND a maker that were new to us.

This Master Mason apron shows a typical all-seeing eye symbol on the flap, signifying watchfulness.  The body features an arrangement of Masonic symbols with celestial and terrestrial columns on a mosaic pavement at the top of three stairs.  Between the columns are a sun, moon, shooting star, seven stars, clasped hands, three candlestands and an altar with an open Bible.  Rough and smooth ashlars appear to the sides and at bottom center is a coffin.

Applied on the back is a printed label for the apron’s maker – “Hartford / W. Laughton / Painter.”  Unfortunately, little is known about William Laughton (possibly 1794-1870), despite the inclusion of his label on this apron.  The best source of information about his activities is a series of newspaper advertisements in the Hartford papers between 1819 and 1824.  In August 1819, he begged “leave to inform his friends and the public, that he has taken a room a few doors east of the Court House…where he will do all kinds of ornamental painting, in the neatest manner, and at the shortest notice.”  By September 1819, he was advertising as a “delineator, ornamental, and sign painter,” and that he would “execute Masonic paintings and Signs of every description.”

In June 1820, he used his ad to “[tender] his sincere thanks to his friends and the public, for the encouragement they have given him in his profession for a year past.”  In this same advertisement he specifically noted that he would do “Masonic paintings, such as carpets, aprons, etc., etc.”  And, at the end, he noted “W.L. has on hand a few Masonic Aprons, which he offers very low.”  In addition to his newspaper advertisements, Laughton marketed himself by entering a painting in the local cattle show in October 1822.  According to a published account of the fair, “Mr. Laughton…offered for inspection, a fruit piece painted by himself.  This was considered by judges, to indicate a talent in the art which deserves particular encouragement.”  In 1823, his advertisements focused specifically on Masonic aprons, such as the one in the Connecticut Mirror on June 30, 1823, which was headed “Masonic Aprons,” and included an illustration of an apron.  “William Laughton,” the advertisement read, “has now on hand, a handsome assortment of Masonic Aprons, plain and gilt, very cheap by the dozen or single.”

After 1824, Laughton disappears from the newspapers.  He may have headed out of town to work as an itinerant painter.  In an 1898 biography of Esek Hopkins (1718-1802) (Commander in Chief of the Continental Navy, 1775-1778), a portrait of Hopkins is mentioned.  It was “taken from North Providence to Brookline, and in 1825, as it had become somewhat defaced, was turned over to a man by the name of Laughton, a carriage and sign painter, of Brookline, to be repaired.”  We do not know for sure if this “Laughton” and the William Laughton who made this apron are one and the same, but it is possible.  The 1838 Hartford City Directory lists Laughton back in the city as a “fancy painter.”  Few other details remain to tell us about the latter part of his life.  A “William W. Laughton” is listed in the records of the Grand Lodge of Connecticut.  He joined Bridgeport’s St. John’s Lodge No. 3 in 1862, but there is no birth date given, so this is an inconclusive match, especially since it seems strange that Laughton would have joined so late in life after making and selling aprons in the 1810s and 1820s.

Perhaps further information about William Laughton will come to light over time.  If you know of other aprons by Laughton, please let us know in a comment below!

To learn more about our apron collection, see our new book, The Badge of a Freemason: Masonic Aprons from the Scottish Rite Masonic Museum & Library, available June 2015 at www.scottishritenmj.org/shop.

Edward Field, Esek Hopkins, Commander-In-Chief of the Continental Navy during the American Revolution 1775 to 1778 (Providence: The Preston & Rounds Co., 1898).

I am indebted to Robert Fitzgerald, Grand Secretary, Grand Lodge of Connecticut, for sharing the Laughton Masonic membership information with me.

Joshua--Many thanks for your comment. We don't know too much more about William Laughton than is noted above, but if you would like to send an image of your apron to info@srmml.org, we would be happy to take a look. Best, Hilary Anderson Stelling, Scottish Rite Masonic Museum & Library

I have just purchased a handpainted apron with Laughton written on the bottom.

Hi, my name is Joshua Murray and I just purchased a hand painted sheepskinned apron with Laughton written on the bottom. I would love to find out more info on it.