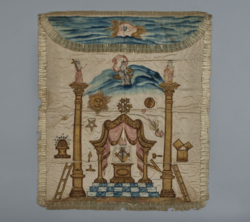 The Scottish Rite Masonic Museum & Library was very excited to purchase this apron at auction last fall.  It has a rather jaunty painted decoration on silk.  The central image includes a mosaic pavement with two columns supporting a distinctive pedimented archway, hung with pink drapery.  At each side is a taller column, one with an allegorical figure of Faith, the other with Charity.  In the center, in the midst of a blue sky, sits a figure of Hope with an anchor.  Scattered along the sides are several Masonic symbols, often included on Master Mason aprons.  Unfortunately, we do not know who made or owned this apron.

But, it does bear a striking similarity in style and design to an apron now in the collection of the Detroit Historical Society.  That apron shows the same blue and white mosaic pavement and a very similar pedimented archway with drapery, although in blue rather than gold.  It also has the allegorical figures of Faith, Hope and Charity.  According to family history, this apron was owned by Oliver Williams (1774-1834), who became a Freemason in Corinthian Lodge in Concord, Massachusetts, in 1813, but moved his family to Detroit a few years later.

Family history for that apron attributes it to a William Marshall.  And there was a William Marshall in Boston who joined the city’s Lodge of St. Andrew in 1797.  However, he is listed as a merchant on his membership card at the Grand Lodge of Massachusetts.  Advertisements in the Boston newspapers from 1808 to 1815 note that Marshall specialized in wallpapers:  he “has on hand, a good assortment of new figured Paper Hangings and Borders, some of which are his own making,” as well as beds, bed ticking, mattresses and upholstered furniture.  Given this evidence, this apron may have been purchased from Marshall’s store – or there was another William Marshall who worked actively as an artist. 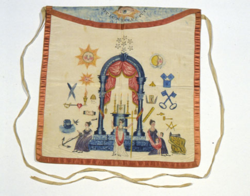 The pedimented archway that is so prominent on this apron calls to mind the elaborate doorway pediments that were popular in the Connecticut River Valley of Massachusetts during the mid-1700s.  Perhaps the artist of this apron was from that area, or had visited and was influenced by the doorways.  The bright color scheme was popular during the early 1800s.  Here are examples of two other aprons from our collection that employ similar colors and symbols.  The history of ownership and manufacture has been lost for each, but taken together with the one we just purchased, we can see that Freemasons of the early 1800s enjoyed bright colors and a similar rendering of central Masonic symbols. 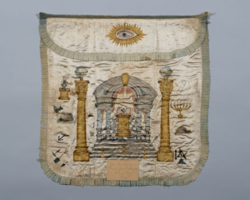 To learn more about our apron collection, see our new book, The Badge of a Freemason: Masonic Aprons from the Scottish Rite Masonic Museum & Library, available June 2015 at www.scottishritenmj.org/shop.