Happy 40th! A Look Back at the Museum & Library's Grand Opening
How to Catch Masonic Impostors Using Index Cards

Hanging Out by the Water Cooler 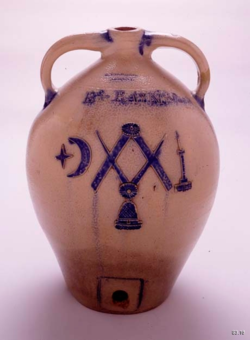 This sturdy vessel, shaped like an upside-down pear, was made for a particular purpose—to hold water and to help keep it cool and easily accessible through a spigot at the container’s base.  Although it is a utilitarian object, this water cooler features decoration and personalization that point to an interesting story about who owned and used it.

Now part of the collection of the Scottish Rite Masonic Museum & Library, this water cooler originally belonged to Edmund Raynsford (1784-1855). Born in Sheffield, Massachusetts, Raynsford moved to Bethlehem, New York, around 1820. Records note that he earned a living in a variety of ways—as a merchant, hotel owner and postmaster. The United States government appointed Raynsford postmaster at New Scotland in 1824. Descriptions of the town from the 1880s tell us that the post office and tavern or hotel were located in the same building. Active in politics, Raynsford helped organize the effort to have a law passed in the early 1830s that created a new community—New Scotland—out of the town of Bethlehem.  He also served as a state representative in 1838.

The potter who shaped Raynsford’s water cooler, Moses Tyler (1794-1846), lived about eight miles away from Raynsford, in Albany, New York.  Tyler operated his business near the area clay deposits he used to make stoneware.  Tyler impressed his mark “M/ Tyler & Co./Albany” near the neck of this vessel.  He also incised Raynsford’s name on the cooler, highlighting the letters he cut in the wet clay with blue cobalt glaze. In addition, Tyler applied clay formed in the shape of different Masonic symbols—a moon and star, a candlestick and a square and compasses adorned with a beehive—all colored with blue glaze—to the surface of the water cooler.  Taken together with Raynsford’s name, these symbols suggest that Raynsford was a Freemason. Unfortunately, it is not known which lodge claimed him as a 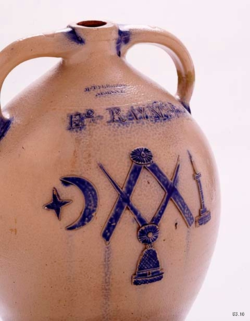 member. There seems to have been a lodge in Bethlehem starting in the early 1800s. As well, there were several lodges in Albany that would have been reasonable traveling distance for Raynsford.  Regardless of which lodge Raynsford called his own, this charmingly decorated water cooler makes clear he was proud of his association with Freemasonry.  It is easy to imagine how the water stored in the vessel helped refresh the thirsty travelers and locals who stopped by Raynsford’s hotel and post office to transact their business and discuss the news of the day.

Posted at 10:00 AM in Decorative Arts, Posts by Hilary Anderson Stelling | Permalink | Comments (0)