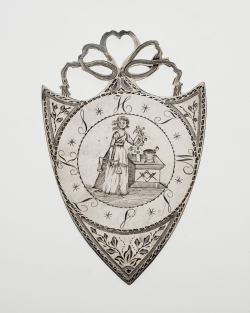 As always, we are excited about some of our recent acquisitions! Just a few weeks ago, the Scottish Rite Masonic Museum & Library was able to add two beautifully engraved mark medals to our growing collection.  These two medals are each interesting on their own. They also prompted intriguing questions when viewed side by side.

In previous posts we have discussed other mark medals in the collection. These engraved badges feature a specially selected symbol—often related to Freemasonry or the owner’s profession—sometimes along with the owner’s name and his lodge’s name and location. These two shield-shaped mark medals are embellished with intricate pierced tops.  These carefully made decorative elements were designed to allow the owner to wear his badge around his neck, suspended from a ribbon.

Each of these medals bears an owner’s name and Masonic lodge. William Ely (dates unknown) belonged to Solomon’s Mark Lodge in Poughkeepsie, New York and commissioned the medal with top pierced to look like a ribbon tied in a bow (see at left). Ely chose a complicated symbol, or mark, for himself:  a young woman holding a vine in her left hand and a set of scales in her right. She stands next to a table or counter, decorated with a square and compasses. A mortar and pestle and a bottle sit on it, possibly suggesting apothecary work. The other medal belonged to John Dutcher (dates unknown), a member of Hiram Lodge No. 27 in Amenia, New York.  His mark, surrounded by the mnemonic associated with the mark degree and a circle enclosing 15 different Masonic symbols, was a top hat and what looks to be a gavel (see image below at right)—symbols often associated with the office of lodge master. 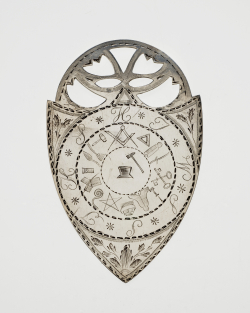 Ely’s lodge, Solomon’s Lodge of Poughkeepsie, first chartered in 1771, had several numbers over the years it met—1, 56 (the number on this medal and used by the lodge from 1797-1800), 5 and 6.  Members are thought to have established a mark lodge, called Solomon’s Mark Lodge, during the late 1700s.  Hiram Lodge No. 27—first founded in 1793 as Payne Lodge, called Hiram Lodge after 1797—received a dispensation for a mark lodge in 1810. The Grand Chapter approved the charter for Hiram Mark Lodge No. 65 in 1811. 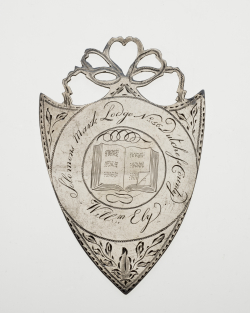 The Ely and the Dutcher medals are both shield-shaped with different pierced elements.  A close look at the sides of the two medals that bear Ely’s and Dutcher’s names show like symbols—an open Bible with a corner of a page folded back—engraved in a similar style (see images at left and below). The image is embellished with the same flourishes at the top and bottom of the open volume. This and other similarities shared by the medals suggests a question: did the same craftsman design and engrave these medals? Hopefully, with further research, we will learn more about these medals' owners and makers. If you have any ideas or insights, be sure to leave a comment below! 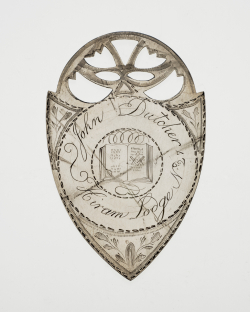