Decorated Chests in "Every Variety of Painting for Lodges"
Please Pass the Butter! A New Acquisition 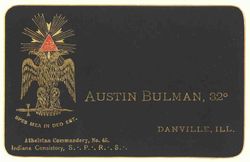 "Masonic Emblem Cards: Victorian Tradition in a Fraternal World" is currently on view in the Van Gorden-Williams Library & Archives reading room at the Scottish Rite Masonic Museum & Library. Drawing from hundreds of such cards in the Library & Archives collection, the three cases in the reading room feature examples of these small but interesting objects.

The custom and etiquette surrounding the use of calling cards in the United States was well established by the mid-1800s. Often simply printed with the owner’s name, these cards formed part of an elaborate ritual of visiting friends’ and acquaintances’ homes. The timing of visits, who might leave a card for whom, and even folded card corners allowed people to send and receive socially coded messages. 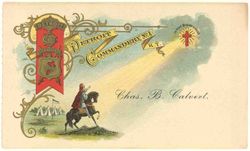 Although similar in form, the Masonic calling cards currently on view functioned somewhat differently. Masons and printers referred to cards as emblem and exchange cards; names that reflected both the cards’ decoration and their use. Most of the cards on view here were explicitly made for and used at Triennial Conclaves, conventions of thousands of Masonic Knights Templar took place every three years. These gatherings often involved cross-country railroad journeys--called pilgrimages--of large groups of Masons and their families.

Although mostly created for York Rite events, the cards often list all of a man’s Masonic affiliations, including Blue Lodge, Scottish Rite, and Shrine. Women and children participated in social events surrounding the Conclave and sometimes had their own cards. On view in the reading room are examples of not only Mason’s cards, but those of wives, sons, and daughters.

Unlike traditional calling cards, which were usually left by a visitor to a home, these emblem cards were likely exchanged in person between Masons. Recipients valued them as souvenirs. The cards on view are a window on to past social practices and a reminder that the urge to connect and collect is not new. Today many Masons carry “Masonic business cards” which detail Masonic affiliations. They exchange them with other Masons, at meetings and social events, continuing the tradition established over a century ago.

Have a Masonic business card? Visiting the Museum? Want to donate it to the Library & Archives? Drop one off in the container on the reference desk.

Thanks for the kind words. Yes, you're right that printers had "blanks" that had the design printed on them, but not the name, which they then added. We have an example on view in our reading room of a "blank" card with only the design and then the same card design with the name printed on it.

Great article on emblem cards for Masons! We have a number of cards from the founding fathers of Omaha Masonry, recovered from an 1893 cornerstone. I noticed the card of Joseph Hoppock on your article, included in the SMJ Scottish Rite Journal. Interesting note on that: I have several emblem cards from the time period that are exactly the same, so I would assume it was a standard template and members could simply have their name printed on the top right.

John Hoppock was born in Dayton, OH in 1856 and was active in Blue Lodge, served as High Priest for Lincoln Chapter #6, R.A.M. in c.1898, was Commander of Mt. Moriah Commandery #4 in 1898, and was a member of Sesostris Shrine. He joined the Valley of Lincoln Scottish Rite in February, 1894, and passed away in October, 1905. He was the Lincoln agent for the Chicago, Rock Island, and Pacific Railroad.